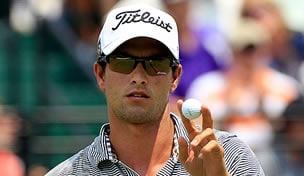 Getty Images
TURNBERRY, SCOTLAND - JULY 16: Steve Stricker of USA hits an approach shot on the 2nd hole during round one of the 138th Open Championship on the Ailsa Course, Turnberry Golf Club on July 16, 2009 in Turnberry, Scotland. (Photo by Andrew Redington/Getty Images)  -

SYDNEY – Adam Scott’s commanding win at the Bridgestone International has earned him the Australian Golf Digest Player of the Year award, ahead of Jason Day.

Scott led from start to finish in August to win the Bridgestone title.

In April, Scott shot a final-round 67 at the Masters to tie for second with Day, two shots behind South African winner Charl Schwartzel.

Australian Golf Digest editor Steve Keipert said “2011 will go down as the year Scott made his biggest steps yet en route to reaching his undeniable potential.”

Karrie Webb won the women’s award for the 13th time after highlighting a stellar year by winning the HSBC Women’s Champions at Singapore in February, before claiming the LPGA Founders Cup in Arizona the following month.