The Social: Twitter unites! And it only cost Haotong Li $98K 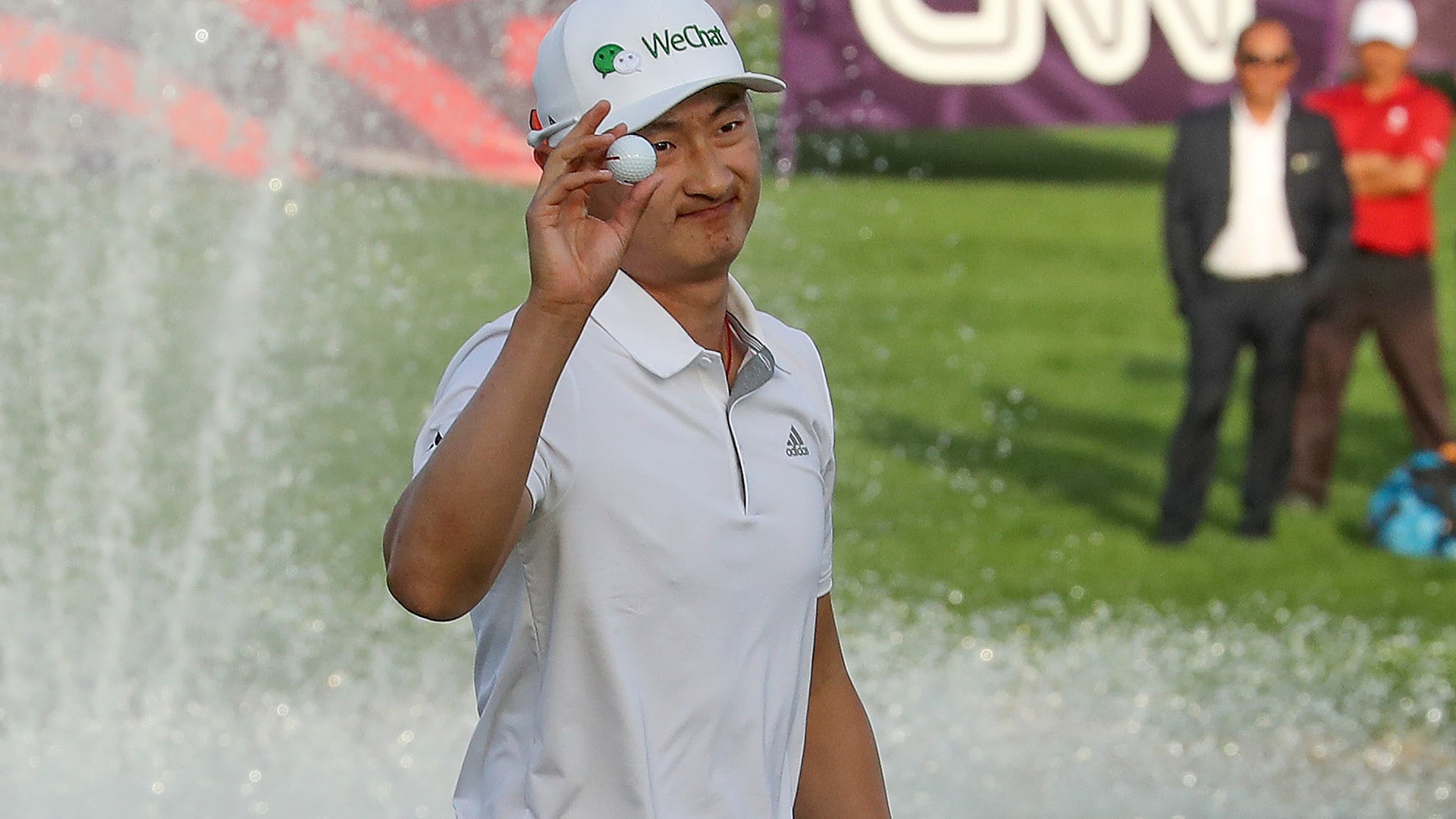 In what many people are calling the upset of the century, Golf Twitter unanimously agrees on something; Jordan Spieth and Patrick Reed make up (wink, wink); and an update on the PGA Tour power couple vacation that sadly has come to an end.

Sure, social media has some positive aspects, but at its core it exists to tear people apart.

The internet seems to always find a way to turn even the simplest disagreements into bitter arguments – everything from the color of a dress (blue and black) to whether or not a hot dog is a sandwich (it isn’t). So when everyone comes down unanimously on one side of a particular issue, it’s rather noteworthy.

But such was the case with the penalty assessed to Haotong Li on Sunday in Dubai.

The Dubai Desert Classic defending champ was given a two-shot penalty on the final hole for breaking the new rule that bans a caddie from lining a player up for a shot.

Problem is, video of the incident doesn't appear to show the violation. But don't take my word for it, take the word of every pro/former pro/analyst that came to Li's defense. Here's a sampling:

After 2 weeks of golf in the @EuropeanTour i toke one thing in clear... the @RandA and @usga have to check those new 2019 golf rules... my Chinese brother @haotong_li didnt deserve that penalty on the 72nd... the line is to thin... 🧐

This is so ridiculously marginal. The player should be given the benefit of the doubt. The rule changes are largely about the spirit of the game & player integrity not this pedanticness.... https://t.co/BAgufWzRhi

Hard to believe @haotong_li has been penalised for this. Frankly, I think it’s a shockingly bad decision and for the life of me I cannot see how Mike has lined Haotong up here 🤷🏼‍♂️. https://t.co/cJ4OZZbRKk

Awful decision as caddie has walked away before putter even behind the ball or player has taken his stance Feel sorry for the caddie as he will be gutted, how about @EuropeanTour officials start enforcing the rules on slow play which is killing the game, painful to watch today https://t.co/RN02ZQm9ya

Learn to read a room, Rules of Golf enforcer nerds. Maybe just step back, take the L and let us have this one. Would be a nice change of pace, for once.

Golf fans were gifted an unexpected treat on Saturday at Torrey Pines, where Jordan Spieth and Patrick Reed ended up in the same group for the first time since their very public fallout following the Ryder Cup.

Reed said some things, and then he said some more things, and then for good measure added few more comments just in case anyone wasn't quite sure how he felt about being split up from his former partner in a losing effort. (Spoiler alert: He wasn't happy.) As recently as last month, both players confirmed they hadn't spoken directly since the event.

So it was anyone's guess how the their pairing would shake out, but a heavyweight brawl some thought they'd see never materialized. Instead, Spieth and Reed swallowed their pride, put on a smile for the cameras and embraced for the Hug Heard 'Round Golf Twitter on the first tee:

It was a brilliant PR move and they would've got away with it too, if it weren't for those meddling kids Reed's mouth – the reigning Masters champ went on to say after the round that he and Spieth were still "really good friends."

Maybe Reed just has a different definition of "really good" ... and "friends" ... than the rest of us.

This is truly the joke that keeps on giving.

Last week, the European Tour's Content Committee pitched several (terrible) ideas. And as it turns out, one of them actually made it off the cutting room floor.

Introducing "Monty's Pythons" – a show where Colin Montgomerie discusses some of the biggest snakes he’s seen during his years on tour. No, seriously. They got the World Golf Hall of Famer to cut a promo and everything.

The European Tour is going to play this sucker out til the bitter end, and we can't wait to watch.

Cody Parkey's terrible, horrible, no good, very bad month rolled on at the NFL Pro Bowl this weekend, and he wasn't even there.

The Chicago Bears kicker missed a kick that would've won his team the NFC wild card playoff game, and fans aren't quite over it. Especially the children:

It's not breaking news that Bryson DeChambeau is the smartest guy in the room. But this is taking it to another level.

During his runaway victory on Sunday at the Dubai Desert Classic, European Tour cameras caught DeChambeau and his caddie chatting about an approach shot. The pre-shot routine is more on-brand than you could even imagine:

Maybe there is some rocket scientist out there somewhere reading this (yeah, right ...) who understood all of that. But here's a live look at the rest of us:

We brought this PGA Tour power couple vacation to your attention last week, but it wouldn’t be a proper edition of The Social without an update.

The foursome of Dustin Johnson, Paulina Gretzky, Brooks Koepka and Jena Sims lived it up in the Maldives for a week, and they offered fans a glimpse (more than a glimpse in Koepka’s case) inside their tropical getaway on Instagram.

Jena Sims wants to know who wore it better on her Instagram page. pic.twitter.com/zSsWM6PEg2

Yes, the photo that quickly went viral was the one featuring the backsides of Koepka and his girlfriend, but the trip produced plenty of other pictures that look like something out of brochure for the islands, because duh, of course they do.

Let’s hit the Maldives and hide behind palm trees🌴

Nice to see DJ back on his fiancée's Instagram page after being scrubbed late last year amid rumors of a break-up.

The king and queen of vacations are back and better than ever, and their proteges appear to be very quick learners. All is right in the world.

Guy has got a point.