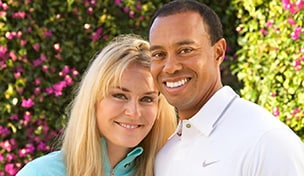 ORLANDO, Fla. – Tiger Woods was ready with an answer regarding his new relationship with U.S. skier Lindsey Vonn. He knew the question was coming.

Woods, a seven-time winner of the Arnold Palmer Invitational, met with the media Wednesday at Bay Hill and the fifth question he was asked was about Vonn. Woods and Vonn both released photos and a statement via social media Monday to announce that they’re now an item and subsequently asked for privacy.

Tiger and Lindsey: Tale of the tape

Get to know Lindsey Vonn

“Well, it’s very simple,” Woods said. “We’re very happy where we’re at, but also we wanted to limit the stalkarazzi and all those sleazy websites that are out there following us.

“I've had situations where it’s been very dangerous for my kids and the extent they’ll go. We basically devalued the first photos.”

'Stalkarazzi' – in case you’re having trouble deciphering the lingo – is essentially the stalking paparazzi.

Asked if he’s going to consult Rory McIlroy about what it’s like to be part of one of sport’s top power couples, Woods responded with a resounding “NO.”