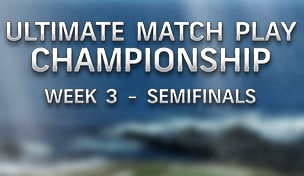 Jack Nicklaus, Tiger Woods, Ben Hogan and Bob Jones were hardly tested in their quarterfinal matches, with each higher seed receiving at least 56 percent of the online votes at GolfChannel.com.

The semifinals, however, should prove to be these players’ most difficult test yet, as it will require voters to compare generational talents with no head-to-head record.

The most pressing question now: Can Hogan and Jones prevent a seemingly inevitable final match between Jack and Tiger?

Of the myriad duels between these two legends, this may have been the most lopsided. The top-ranked Nicklaus crushed the Black Knight, receiving a quarterfinal-best 92.8 percent of the votes to move on to the semifinals. So far, Nicklaus has trounced each of his first two opponents, Phil Mickelson and Player, gaining no less than 92 percent of the popular vote.

Hey, at least Watson would hope for this kind of match-play dominance from Woods at Gleneagles. There was no love lost between these fierce competitors, who likely exchanged first-tee pleasantries and little more, but Woods prevailed by receiving 79.4 percent of the vote, easily advancing to the semifinal round. Interestingly, Tiger earned nearly 79 percent of the vote in his Round 1 matchup, too, against Seve Ballesteros.

Many predicted an upset here, citing The King’s immense popularity in the golf community. But fans and observers selected Hogan, who has both more PGA Tour wins and major championships than Palmer. Still, this was the closest quarterfinal match, with Hogan receiving 56.1 percent of the vote.

That sets up a blockbuster semifinal matchup between Hogan and Woods, two men who dominated their respective eras in golf.

Picking a favorite for this match was already picking nits, but Jones knocked off the PGA Tour’s all-time leading winner, receiving 59.2 percent of the vote. Now, of course, the best amateur ever will face off against the man with the most majors won.

In 1960, a then-20-year-old Nicklaus spoke glowingly of his semifinal opponent, gushing, “Jones is the greatest golfer who ever lived and probably ever will live. That’s my goal: Bobby Jones. It’s the only goal.”

After watching Jack win the 1965 Masters, Jones commented: 'Nicklaus played a game with which I am not familiar.'

Voting is now open for the two third-round matches, with winners announced on Feb. 12.