Lewis four back of Miyazato after penalty 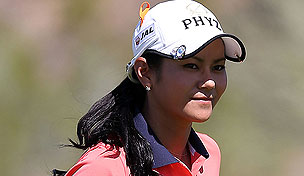 PHOENIX – Ai Miyazato regained control in the LPGA Founders Cup on Saturday, ending up with a bigger cushion than she expected when Stacy Lewis was penalized two strokes after the round.

Making three birdies in a four-hole stretch on the back nine and saving par with a 12-foot putt on the finishing hole, Miyazato shot her second straight 5-under 67 after opening with a tournament-record 64. At 19-under 197, the diminutive Japanese star had a four-stroke lead over Stacy Lewis and Jee Young Lee.

''It was a pretty solid round,'' said Miyazato, seeking her 10th LPGA victory. ''I didn't hit any bad shots and I had a few chances, a few birdie chances out there, but I couldn't make it. But still toward the end I started to feel more comfortable with my putting.''

Lewis was penalized when it was ruled that caddie Travis Wilson tested the sand before Lewis played out of a bunker on the par-4 16th. That turned a 66 into a 68 and doubled her deficit.

''I didn't see Travis do anything when we were playing. I wasn't looking at his feet, obviously,'' Lewis said. ''So, we looked at the video and you have to slow it down, zoom in on his foot. He walks into the bunker, he kind of pushes, he kind of bounces his knees a little bit and his foot turns.

''And that was kind of the big indicators that his foot turned and you could kind of hear the sand crunch a little bit. So, that's deemed to be testing the sand.''

The penalty made the third-ranked Texan's bid to take over the top spot in the world from Yani Tseng much more difficult Sunday. Coming off a victory two weeks ago in Singapore, Lewis would jump to No. 1 with a victory, as long as Tseng – tied for 63rd at 2 under after a 72 – finishes third or worse.

''More than anything, I just feel bad for him because he feels awful,'' Lewis said. ''But he's the best caddie out here, so we'll be fine. We still have a chance to win tomorrow, so we'll be OK.

''He's very upset about it. I told him that 'The good part is that we got it before the cards were turned in, so I can still play tomorrow and we have a chance to win.' That's our goal every week is to have a chance to win on Sunday. So, I mean, I know he's really upset right now, but that's the first penalty we've ever had like that in 4 1/2 years, so everybody makes mistakes and we'll move on from it and we'll be fine.''

Lee, the second-round leader, had a 72 in cooler conditions on the cactus-lined course. After two days in the low 90s, it only reached the mid-80s on Saturday at Desert Ridge's Wildfire layout.

Miyazato was as graceful and efficient as ever, making it impossible to tell that she's returning from a whiplash injury sustained three weeks ago in a five-vehicle crash in Thailand. She hit the first 17 greens in regulation before stumbling with a shot into a bunker on the par-4 18th.

''Because I'm focusing, taking one shot at a time, I think that's why I've been playing really solid,'' Miyazato said. ''And my irons are pretty good, especially my irons distance is really good so far, so hopefully I can keep doing that tomorrow.''

On the 18th, her sand shot was a bit strong, leaving a 12-foot par putt. When the putt tumbled into the cup, she smiled and gave a restrained fist pump.

''The last putt was really clutch,'' Miyazato said. ''That's going to be good momentum to tomorrow.''