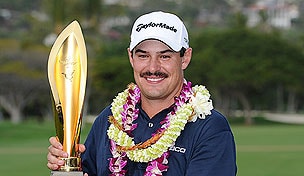 Getty Images
PONTE VEDRA BEACH, FL - MAY 05: Recording artist Tim McGraw performs during the Military Appreciation Ceremony prior to the start of THE PLAYERS Championship held at THE PLAYERS Stadium course at TPC Sawgrass on May 5, 2010 in Ponte Vedra Beach, Florida. (Photo by Sam Greenwood/Getty Images)  -

The PGA Tour season is officially under way, after Dustin Johnson powered his way to victory Tuesday at the Hyundai Tournament of Champions. Now, it’s time for the rest of the Tour players to get their 2013 campaigns started.

The Sony Open in Hawaii, which begins Thursday at Waialae Country Club, is the first full-field event of the season on Tour. For a full list of tee times, click here. But these are three featured groups to watch this week:

Pick your favorite Johnson. Last year Wagner, with one of the Tour’s most epic mustaches, hung tough on the back nine to win by two at Waialae. But Dustin Johnson showed observers Tuesday why he’s one of the most awe-inspiring talents in the game, overpowering the Plantation Course at Kapalua to the tune of a four-shot victory. Waialae is an entirely different ballpark – par 70, tight fairways, an emphasis on precision – but it would surprise if each player in the Johnson Trio didn’t perform well on the second leg of a back-to-back.

All three guys are coming off good weeks at Kapalua, though the best in this group was Bradley, who tied for fourth in the season opener. Kuchar came back from a dismal opening round to finish T-9, and Mark Wilson – who at 38 was the second-oldest player in the field – would have posted a high finish if not for a second-round 76.

Who knows – in nine months, these players might be the candidates for PGA Tour Rookie of the Year. All are intriguing prospects, perhaps none more so than Guthrie, who in limited action last year won twice on the Web.com Tour (finished second on the money list) and posted three top-25s in four PGA Tour starts. Langley, a former NCAA champion, navigated his way through Q-School, and Henley punched his ticket to the Tour via the Web.com circuit, where he won twice in 2012 and finished third on the money list. Big-time talents here.