A serene scene on Sunday before the Masters 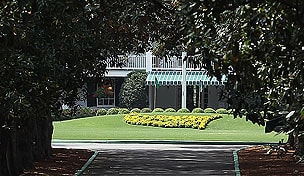 Getty Images
LUSS, SCOTLAND - JULY 09: Nick Dougherty of England tees off on the 8th hole during the First Round of The Barclays Scottish Open at Loch Lomond Golf Club on July 09, 2009 in Luss, Scotland. (Photo by Richard Heathcote/Getty Images)  -

AUGUSTA, Ga. – To be clear, Sunday is a “member’s day” at Augusta National. Preparations are underway, players – even the press, albeit with limited access – are allowed on property, but for one final day the Masters can wait.

It is a distinction which explained the serene scene surrounding the first tee just before the lunch hour on Sunday.

On an eerily peaceful spring day, Trevor Immelman set out for a round with George Lopez. Yep, that George Lopez with the 2008 champion, followed by 14-year-old Chinese phenom Tianlang Guan, who shyly slipped onto the first tee and waited for an approving nod to tee off.

One half expected to see a colloquial “golf ball tube” adjacent to the first tee to keep order and track the comings and goings of groups, but the teen played away (observation: judging by Guan’s drive, he is not as short off the tee as advertised) and the parade continued.

Charles Coody slipped in behind Guan, hitting his drive about halfway up the hill at the first hole and prompting Fuzzy Zoeller to playfully bark from the adjacent ninth green, “Charlie, you need to move up (a tee).”

It is all part of the meandering pace that will soon be shattered by the monsoon of the year’s first major. There is no tee sheet, just members mixed amid major championship hopefuls – the acme of surreal in perfect symphony with the status quo.

This much is certain: seven days from now there will be roars – always are. But on this Sunday one group was more surprising than the next.

There was defending champion Bubba Watson setting out with his wife, Angie. Asked if she was scared, Mrs. Defending Champion offered a serious “very.”

Next up was '07 champion Zach Johnson playing with his caddie Damon Green, an accomplished player who nonetheless looked strangely out of place in something other than his signature white overalls.

Or maybe it was the sight of three-time champion Phil Mickelson heading out with former Secretary of State Condoleezza Rice. Rice, one of two female members admitted to the club since last year’s Masters, was steady off the first tee and found the fairway. Not bad considering the circumstances.

What wasn’t surprising was the endless parade of players and past champions who show up each year on the Sunday before the Masters. With apologies to, well . . . every other event in golf, that doesn’t happen anywhere else.

The golf course hasn’t changed, at least not fundamentally. This isn’t about practice, this is about the game’s ultimate playground and a rare chance to have one’s fill.

Charlie Epps, 2009 champion Angel Cabrera’s swing coach, has been coming to the Masters since 1979. As he wandered down the first fairway on Sunday your scribe asked him if Augusta National ever changes?

“Oh yeah,” he smiled brightly. “It’s just getting better, like Disneyland for adults.”