Anchoring battle about who gets to make the rules 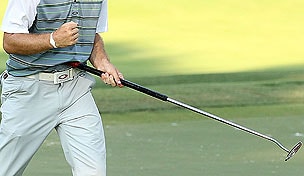 “Why don’t professional golfers makes rules for professional golf?” pleaded Feherty, his face red from sunburn and exasperation. “We’re the only sport that we allow amateurs to do it. That’s fine if you’re a proctologist or whatever, but it’s not working for me.”

The Northern Irishman was venting over a rules infraction that cost Carl Pettersson two strokes on his first hole to begin the final round of the 2012 PGA Championship, but he may well have been speaking for a growing number of play-for-pay types.

The current issue is the U.S. Golf Association and Royal & Ancient Golf Club’s proposed ban on anchoring, and the PGA Tour spoke with one voice on Sunday when commissioner Tim Finchem announced the circuit’s opposition to the potential ban.

Feherty’s words seemed to echo last week as some players dug in on the proposed ban. For some this is no longer about long putters or anchoring – that ship has likely sailed – as much as it is a system that in some circles has become antiquated by the modern game.

“It’s like there was a conclave and the smoke went up and Webb Simpson is a cheater. That’s not right,” reasoned one player.

In the USGA and R&A’s defense, the comment period, which ends on Thursday, is, by design, intended to give all of the shareholders a voice in the rulemaking process, but for some players it felt like window dressing.

Perhaps the USGA and R&A will change direction and back off on the proposed ban, which would go into effect in 2016, but that didn’t seem likely as we inch toward a final decision later this spring. From that possibility has emerged a larger, more esoteric debate.

“I have said all along, take anchoring out of the equation, is this the best way to make rules for our sport? Should the PGA Tour make its own rules? No. Should the PGA Tour and the PGA of America and the USGA and R&A and journalists be involved? I think so,” said Paul Goydos, one of four player directors on the policy board. “I don’t think this is the way we should be writing rules for our sport.”

Goydos is hardly a lone voice on this issue, although during last week’s conference calls with the player advisory council and policy board, the conversation never ventured into whether the Tour should consider getting into the rulemaking business, sources say.

“I don’t think the Tour is trying to rewrite the rulebook,” said one member of the 16-player PAC. “I personally don’t see what the big deal is. The rhetoric among the players is as high as it has ever been in questioning why we are governed by an amateur organization (USGA and R&A).”

It’s a credit to Finchem that he’s been able to keep his players largely fixated on the anti-ban talking points, which are the potential ban’s impact on the growth of the game and a disturbing lack of statistical data to support the USGA and R&A’s concerns with anchored putting.

The alternative would be a perception issue that the Tour could lose in the court of public opinion. A power struggle between the Tour and golf’s rule makers to save anchoring for a small percentage of players – one official estimated the number of players who anchor on any given week ranges between 10 to 15 percent – would appear self-serving and shortsighted.

On this, Finchem has been clear. Although he maintains the Tour’s right to make its own rules he has repeatedly stopped short of suggesting bifurcation is the answer to the current anchoring quagmire.

Finchem has no interest in getting into the rulemaking business, but like Goydos, he seemed to suggest on Sunday at Dove Mountain that it might be time to make the process a tad more inclusive.

“Transparency, openness, discussion, input involving people across the spectrum in terms of rulemaking, particularly as it relates to equipment rules, is very, very important,” said Finchem.

For the Tour, there is an inherent problem with wholesale bifurcation that is rooted in the complex realities of a global game as well as the traditions of golf. While the current system is not perfect, the alternative could be equal parts messy and self-serving.

“The hardest thing to do is get a rational, non-biased opinion for what is best for the game and the Tour without your own personal feelings coming into it,” said Brad Faxon, a former policy board member and a member of the Champions Tour’s PAC. “Who really has the best interest of the game? That’s why you have to leave governing away from us, the players, and follow the rules.”

Although bifurcation has become a buzz word of late, in many ways it is something of a “nuclear option.” If the Tour breaks with the USGA and R&A on anchoring the possibility exists, however unlikely it may seem, that there would be one set of rules for Tour play and probably the PGA Championship (the PGA of America has sided with the Tour in opposition to the ban) while the U.S. and British Opens and possibly The Masters would be played under a separate set of rules.

If the European Tour supports the ban, which recent reports have suggested, there is also the issue of what set of rules the World Golf Championships and Ryder Cups in Europe are played under.

It’s the type of distractions Finchem has successfully avoided for most, if not all, of his tenure, and why the Tour will ultimately fall in line if the anchoring ban is approved. Yet the message Finchem sent on Sunday is unmistakable: this isn’t about changing rules; it’s about changing how the rules are made.