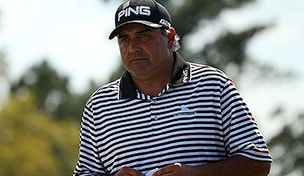 AUGUSTA, Ga. – In 2010, Angel Cabrera branched out for his Champions Dinner, serving the game’s legends an asado, an Argentine meal that includes barbecue, short ribs and beef filets.

Following his Friday 69, one of just two sub-70 rounds from the early wave of players at the Masters, he planned to head to his Augusta rental house for a similar meal.

“Every night is a meat meal,” said Charlie Epps, Cabrera’s swing coach and housemate this week.

If the Argentine continues to play like he did on Friday, closing with birdies on five of his last six holes in the day’s most windblown conditions, he also may be bound for another asado at next year’s Champions Dinner.

Not that Cabrera seemed poised to add to his green jacket collection heading into this week. In seven events this season he’s missed two cuts and posted a single top-20 finish (T-16 at last week’s Shell Houston Open). But then the two-time major champion has a history of playing his best golf at the hardest golf courses.

“He thrives on hard courses,” Epps said. “He’s got himself in a great frame of mind on and off the golf course and once you get everything aligned these guys can play.”