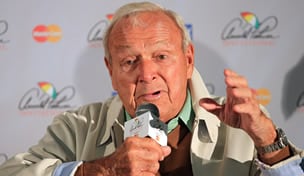 ORLANDO, Fla. – Tiger Woods has a chance to surpass Jack Nicklaus’ 18 major championship victories, but Arnold Palmer says the opportunity is “fleeting” with every passing year.

“I give him a chance to do the record,” Palmer said Wednesday at Bay Hill. “He’ll have to really work hard to keep himself up and keep his mental attitude if he’s going to do it.”

Palmer did say that he’s impressed with Woods form here on the eve of the Arnold Palmer Invitational, where Woods won for the seventh time a year ago. Woods has won twice so far this season (Farmers Insurance Open,WGC-Cadillac Championship) making this the eighth time Woods heads to the Masters with at least two victories.

“I think right now looking at him and watching him play, as I have recently, he looks probably as strong and as good from a golf perspective as I’ve ever seen him,” Palmer said. “I think his swing and his posture and his attitude is far better than it’s been in some time.”

Aside from chasing Nicklaus’ major championship record, Woods is hot on the heels of Sam Snead’s 82 career PGA Tour victories. Woods is second on the list with 76 wins.

“I don't think there is any question about the fact that he can win that many tournaments,” Palmer said about Woods’ pursuit of Snead. “I think he can, and I think he probably will.”