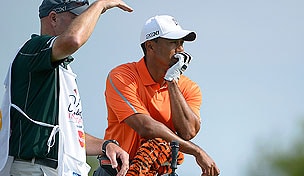 ORLANDO, Fla. – There is no gimmicky, made-for-Madison-Avenue nickname for Bay Hill’s closing three holes. There is no need.

If tournament host Arnold Palmer ever does decide to give his finale a moniker, Woods & Co. likely have some PG-13 options for him following Friday’s unfavorable finish.

When Woods was finished it added up to a bogey-bogey-bogey finish and a fall from the upper echelons of the Bay Hill leaderboard.

Things got sideways when Woods drove into a fairway bunker right of the 16th fairway, slipped trying to reach the green in two strokes from 190 yards and signed for a bogey that felt like a triple.

Remember when the 16th was temporarily converted into a contrived par 4 a few years back? Good times.

The world No. 2 needed three shots to reach the green at the par-3 17th and left his par putt two rolls short at the last for a 2-under 70 that looked a lot more like a 65 in waiting just an hour earlier.

“My score doesn’t indicate how well I played,” said Woods, who is tied for seventh and four strokes off the lead.

In a round that was reminiscent of 2010, Woods mixed sloppy miscues amid masterful play yet remained in the hunt for his eighth Bay Hill bottle cap thanks, at least in part, to a similarly slow finish by Rose.

Combined Woods, Rose and Els, who were paired together for the first two rounds, played the last three in 4 over par. In fairness to the marquee group, that twisting piece of terra firma played to a collective 11.863 stroke average with the 18th ranking as the hardest hole of the week and the 17th as the seventh-toughest.

“The finish kind of got the better of the whole group, really,” said Rose, who carded a second-round 70 and is tied for the lead with Bill Haas at 9 under. “The atmosphere seemed to change when it started to rain. Guys started to struggle a little bit coming in.”

Still, if Woods’ chances were washed away by Friday’s showers he didn’t have the manner of a defeated man when he bolted property, the byproduct of a swing that has produced two signature victories this year at Torrey Pines and Doral and a track record at the King’s track that somewhat mitigates his Friday miscues.

In 2008 Woods was a full touchdown adrift of the leaders at the turn following rounds of 70-68, but he laid a pair of 66s on the field on the weekend and beat Bart Bryant by a shot.

In 2001 he was two back at Friday’s intermission and beat Mickelson by a shot. The point is Woods has proven adept from the pole position and the pack at the Central Florida layout.

“At one point I was one back (following his birdie at the 13th hole) and right there so the good news is we have 36 holes to go,” Woods said.

Mickelson doesn’t have that luxury. Lefty finished his Thursday round with back-to-back three-putts. On Friday he finished his week with a four-putt at the 13th that would have been a five-putt but his first attempt was from the fringe.

From 43 feet Mickelson lagged his first attempt to 5 feet, blew his par putt 5 feet by and needed to convert a 3-footer to save a triple bogey-7. Mickelson signed for a 79, his highest card in 14 trips to Bay Hill.

“I played terrible,” said Mickelson, who added to his woes by playing Bay Hill’s closing three in 1 over par. “I deserved to shoot a score like this, but I felt like if I hit good shots I could make birdies. The (course) set-up was great.”

Els suffered a similar fate over the closing stretch, matching Woods’ bogey at the par-5 16th, and will also miss the weekend following matching rounds of 75, brining into question both players’ status as perennial favorites as the circuit inches closer to Magnolia Lane.

But at least at Augusta National there is time after Amen Corner to make up for mistakes. At Bay Hill there is no such leeway or iconic nickname for those last three holes. As Friday’s play proved, when players round Nos. 16-18 they are just finished, one way or another.