Crane another near miss for Masters 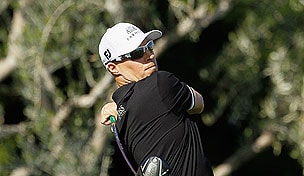 Much has been made of Charles Howell III’s attempt to earn an invitation to next week’s Masters – the Augusta, Ga., native likely needed to be three strokes better at the Shell Houston Open to crack the top 50 in the Official World Golf Ranking and earn a trip down Magnolia Lane – and Geoff Ogilvy, who slipped outside the top 50 when he missed the cut in Houston, but Ben Crane’s tale is filled with similar Augusta National woe.

Despite birdies at his last two holes, Crane finished tied for 17th last year at Augusta National, one stroke outside the top 16 who earn invitations to the next year’s tournament. His tie for fourth on Sunday in Houston moved him only to 90th in the world ranking.

That Fred Couples, a former Masters champion who doesn’t need an exemption, birdied the 13th hole late on Sunday last year at Augusta National to push Crane out of the top 16 only compounded the near miss and prompted a playful plea.

“He’s in, forever. Hook a brother up. Are you kidding me?” Crane recently joked.

Crane is not in the field this week at the Texas Open, which means he will miss the Masters for the first time since 2009.