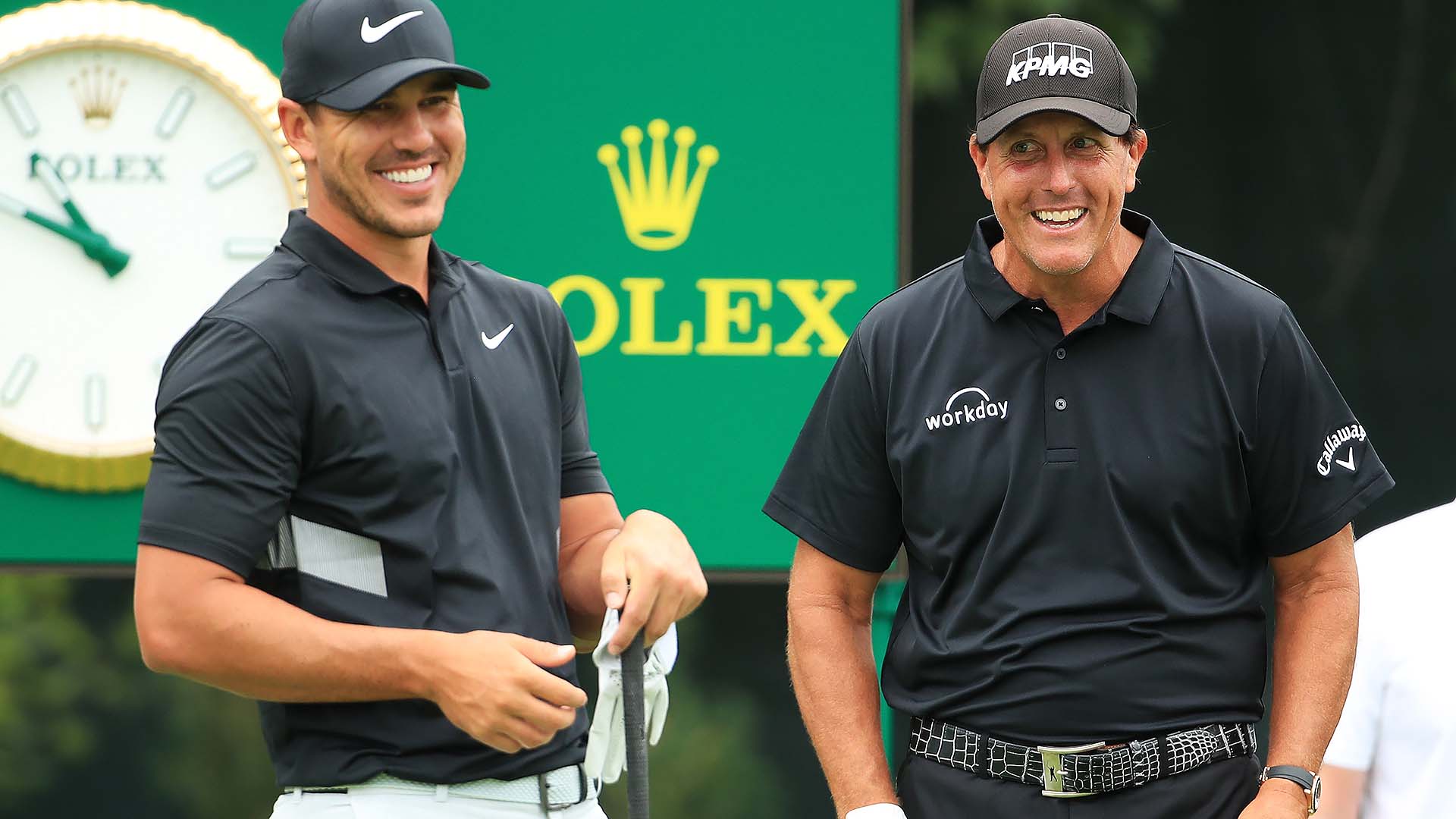 As social media becomes a bigger part of the golf world, nearly as many stories are coming from the online platforms as there are from on the course.

Some posts  are destined to be forgotten 15 minutes later. Others can turn into national news. Just remember that what goes on social media is forever, whether you hit the delete button or not.

From the rise of Phil Mickelson’s social media superstardom to Brooks Koepka’s transition into an Instagram model, here are the social media moments that stood out in 2019, in no particular order:

DO IT FOR THE 'GRAM, BROOKS!

We saw plenty of Koepka on and (especially) off the course this year. Koepka seemed to make just as many headlines stripping down for the cameras as he did on the PGA Tour, where he won the PGA and finished the year as world No. 1.

While he officially slimmed down for an ESPN the Magazine photoshoot, a move that drew the ire of Golf Channel analyst Brandel Chamblee, Koepka showed off his slimmer figure on several occasions throughout the year, posing in plenty of provocative Instagram photos with girlfriend Jena Sims. 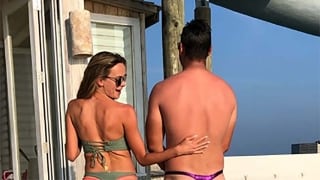 After a week at the at the Abu Dhabi HSBC Championship, Brooks Koepka and Dustin Johnson have opted for a vacation with their significant others in the tropical paradise of the nearby Maldives.

Sticking with Koepka for a moment, is there anything the world No. 1 can’t do? Four majors in three years, Instagram (and real) model … upstaging Dustin Johnson and Paulina Gretzky at their own Halloween party?

Koepka pulled off the impossible this year in October, when he showed up to the DJ-Paulina bash as an iconic character from “Saturday Night Live” made famous by Justin Timberlake and Andy Samberg in the mid-2000s. While there were plenty of great costumes at the party, including those worn by the hosts, it appears Koepka just has a gift for this sort of thing.

In stark contrast to his golf game in recent years, Mickelson completely dominated social media in 2019. After joining Twitter and Instagram in late-2018, Mickelson made up for lost time this year, with more viral hits than can be recounted here.

The 49-year-old used the platforms as a way to give swing tips in flip flops, show off his snow-skiing skills and, most importantly, take not-so subtle jabs at other players, like he did with Matt Kuchar at the Masters. 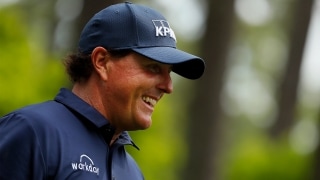 Mickelson also launched a short-form interview/storytelling series of sorts called “Phireside with Phil,” and while every video wasn’t a home run, the punchline to his debut episode was undeniably funny.

NO CALF MUSCLE LEFT BEHIND

Mickelson’s surge to the top of golf social media also coincided with a dedication to getting in shape. What started as a bit about “getting calves like Adonis” after a photo of his eye-popping lower leg muscles went viral, Lefty jumped in with both feet, getting in the best shape of his life.

The five-time major winner refused to go into specifics, but he admitted to slimming all the way down to his college playing weight by the end of the year, which led to photos like the one posted on Twitter by his sister, of Phil - at least what's left of him - going shirtless in the ocean. Tina, Phil Mickelson’s sister, has only tweeted five times in this calendar year. But she did so on Tuesday with a photo you have to see: Phil is ripped.

WIE AND FOWLER GET MARRIED ... TO OTHER PEOPLE

This just in, those at the top levels of professional golf tend to have nice things, including weddings. And that held true for two faces of the game this year, Michelle Wie ad Rickie Fowler.

The few photos that were posted from both weddings, that occurred within a couple months of each other, looked incredible and created all sorts of buzz on social media.

A big congratulations to the happy couples, with only a hint of jealousy.

The European Tour social media team has been the gold standard when it comes to viral golf content for years now, and it was no different in 2019, when they racked up millions of views with a brilliant idea about … coming up with viral ideas.

The video was so good that it inspired several spin-offs and it’s probably a safe bet that you’ll see the Content Committee next year in some capacity.

As great as some aspects of social media are, there’s plenty of downside to so much instant access to the game’s biggest names. Look no further than LPGA superstar Lexi Thompson earlier this year. Thompson, who has more than 400,000 followers on Instagram alone, announced that she was taking a break from social media in April after the negative comments became too much to deal with.

“To read some of the hurtful things being said to me lately isn’t fair and I’m not dealing with it,” the 25-year-old wrote on Instagram. 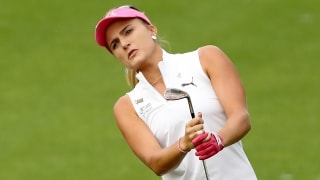 Lexi Thompson is taking a break from her love-hate relationship with social media.

While the break was short-lived, it shows that sometimes it can be good for your mental health to put the phone down every now and then.

ALL THE PRESIDENTS MEN (AND WOMEN)

It has become rather commonplace since Donald Trump became President of the United States, but POTUS continued to tee it up with several of the games biggest stars in 2019, with photos and videos almost always making their way to social media. In addition to awarding Tiger Woods the Presidential Medal of Freedom, Trump played in a group with Woods and Jack Nicklaus early this year. He also hit the links with Lexi, John Daly and Pat Perez among others over the course of 2019.

SOCIAL MEDIA HAS HAD ENOUGH OF SLOW PLAY

Pace of play was a topic of conversation all year, and social media was no exception. If anything, players were louder about the issue on social media in 2019 than ever before. 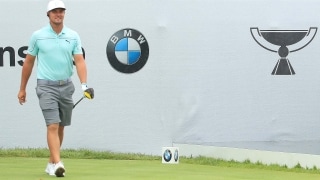 All of the comments would be impossible to collect here, but this year featured everything from Eddie Pepperell calling Bryson DeChambeau a “single-minded twit,” DeChambeau responding to the “haters” with a profane rant on Instagram and Edoardo Molinari tweeting out a list of players who have been put on the clock – and fined – on the European Tour, WGC and major events.

All this to say, if this trend of keyboard warriors continues, who knows what will change but the drama should only escalate exponentially.

Jack Nicklaus doesn’t play much golf on TV anymore, but he had not one, but two(!), moments in the span of a week that went viral online and proved that the 18-time major winner’s still got it.

In September, the 79-year-old made two walk-off winners that social media couldn’t get enough, the second one in front of Kid Rock, because of course it was. 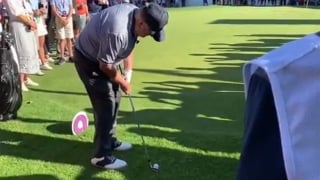 Where else would the year's very best of social media moments end than with the guy who dominated social media in 2019.

Phil Mickelson had all sorts of clips go viral this year, but he only made one ace on the replica seventh hole at Pebble Beach in Jim Nantz' backyard.

As Mickelson put it so eloquently, that's how it's done!

Best of: Tiger moments that stood out in 2019

A look back at Tiger Woods' incredible 2019, both on and off the course.

From Tiger Woods’ winning putt at the Masters to Amy Bockerstette’s inspirational sand save in Phoenix, here are the shots that shaped 2019.