Haas' neck never an issue, in position for SHO win 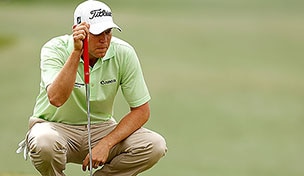 HUMBLE, Texas – Bill Haas would like to rescind last week’s reports about his apparent neck injury.

After getting onto the leaderboard at Bay Hill, he’s once again in contention, tied for the Shell Houston Open 54-hole lead with Stewart Cink.

“Somebody said, ‘How are you feeling this week? And I said, ‘This neck has been kind of bothering me a little bit,’” he recalled from an interview during last week’s event. “I don't even know if I said I was injured. It got blown out of proportion a little bit. It's just one of those things, lot of travel, you get a tweaked neck, just like anybody gets it. It was bugging me a little bit, but it really wasn't even an issue last week.”

He’s now in a position to be a major pain in the neck to his fellow contenders, as a third-round 67 has him chasing his fifth career PGA Tour title.

“Being up there near the lead, you maybe don't sleep as much tonight because you're thinking about it and excited and anxious and want to do well,” he explained. “There's nothing better. It's the reason we play. You know, more times than not, maybe it doesn't work out in your favor, but that's OK. Just being there is a lot of fun.”