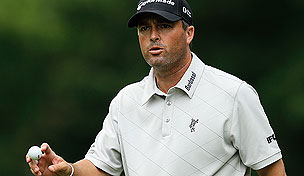 Each week, GolfChannel.com will take a detailed look at the players who pounded the farthest and fastest drives on the PGA Tour. Here are the four most important distance-related stats from the Crowne Plaza Invitational at Colonial, won by Boo Weekley:

Colonial is one of the shortest tracks on Tour, and Palmer, a Colonial member, hit the shortest chart-topper this season. It was 43 yards shorter than last week’s leader at the Nelson, Scott Piercy (396). Palmer tied for 14th at the Crowne Plaza.

It was the long-hitting Canadian’s third time leading this category, and second in the last five weeks (New Orleans). He tied for 22nd at Colonial after a Sunday 74. DeLaet now owns the two longest carry distances of the season, though his big blast in Fort Worth didn’t quite match his 324-yarder at PGA National.

Kokrak topped this category for the first time this season, though his big swing was the lowest since Robert Garrigus’ 121 mph at Hilton Head. The best this season is Charlie Beljan’s 128.41 mph swing at Riviera. Kokrak tied for 18th at Colonial.

Not surprisingly, Kokrak also topped this category for the first time. His ball speed compared reasonably well to the other leaders this season, though Beljan’s 184.90 mph ball speed at Houston remains the standard.