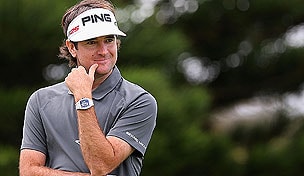 ORLANDO, Fla. – Bubba Watson is playing a home game at the Arnold Palmer Invitational this week.

Watson bought Woods’ former Isleworth home earlier this year and four days ago moved into it with his wife, Angie, and their young son, Caleb. The home is less than 10 minutes from Bay Hill.

Watson was asked what it’s like living in Woods’ place.

“Now it’s my house,” Watson said. “It was Tiger's house. We loved the location of it, and we re-did it all. He let me buy it because he moved out of there.”

Watson was asked if he endures jokes about the fire hydrants in his new neighborhood.

“I love him as a person,” Watson said of Woods. “He made a mistake. I forgave him, and he's living through that. So, no, I see nothing wrong with me buying his house, and the people that are making the jokes, they're dumb. They mess up too.”