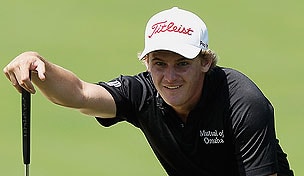 Getty Images
HUMBLE, TX - APRIL 02: Anthony Kim watches his tee shot on the second hole during the second round of the Shell Houston Open at Redstone Golf Club on April 2, 2010 in Humble, Texas. (Photo by Hunter Martin/Getty Images)  -

HUMBLE, Texas – For Bud Cauley, the hardest part was just getting to the weekend. He made it look easy after that.

It had been nearly two full months since the PGA Tour sophomore made a cut, but opening rounds of 68-74 were enough to get it done at the Shell Houston Open this week.

Then he really went to work.

Cauley fired a 7-under 65 that included eight birdies to make a momentous climb up the leaderboard and get himself into contention for his first career professional victory.

“I like this golf course,” he said of Redstone Golf Club. “Last year I was kind of playing well coming into here and kind of continued on. This week I hadn't had my best leading up, but got here and working hard and I hit some good shots and got some confidence.”

In eight previous starts this season, Cauley had made only two cuts, with a season-best result of T-24 at the Waste Management Phoenix Open. He had six top-10 finishes during last year’s rookie campaign, including a T-8 at this event.