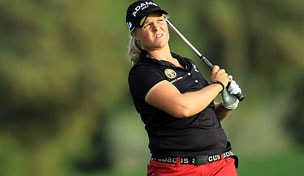 SYDNEY – Sweden's Caroline Hedwall won the New South Wales Open on Sunday, closing with a 4-under 68 for a two-stroke victory over defending champion Lydia Ko of New Zealand.

Hedwall finished at 13-under 203 on the Oatlands course. Ko, the 15-year-old amateur who won the Canadian Open last year, shot a 69.

The South Korea-born Ko became the youngest player, female or male, to win a professional tour event when she won the New South Wales Open last year at 14. Ko went on to finish as the leading amateur at the U.S. Women's Open in July, won the U.S. Women's Amateur Championship in August and took the Canadian Open to become the youngest LPGA Tour winner.