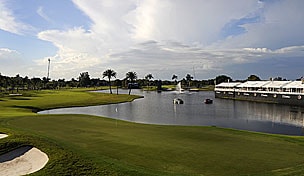 DORAL, Fla. – GolfChannel.com got a sneak peek at what players will see next year following Gil Hanse’s redesign of the Blue Monster, which is scheduled to begin in the next few weeks (the course is not being “blown up” on Monday as some have reported).

The most eye-catching change is the total yardage – 7,493 yards after the redesign, compared to this year’s 7,334 yards – but officials say the actual length will not be that different following Hanse’s work.

One of the biggest alterations will be at the par-5 opening hole, which is playing this week at 529 yards and is listed at 595 yards after the redesign.

The most dramatic changes will occur at Nos. 9 and 10, which will be shifted to the left to make room for an expanded practice tee. The ninth will be shifted farther toward the lake that now rings the 18th green, and extended by about 15 yards, while the 10th hole will now feature a drive over water and will also be slightly longer.

The 15th hole will also undergo a major makeover and essentially become an island green and, according to the redesign plan, play about 15 yards shorter.

“It's right now a very plain par 3, and it's going to be an island green essentially, a beautiful island green,” said Donald Trump, who purchased Doral last year.