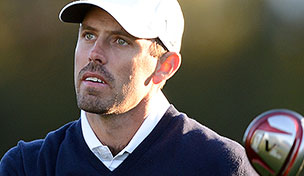 KUALA LUMPUR, Malaysia – Former Masters champion Charl Schwartzel and Wu Ashun of China have the clubhouse lead in the Malaysian Open after the second round was suspended because of darkness.

Schwartzel and Wu shot 4-under 68s Friday to finish 9-under overall at the European and Asian Tour event.

Some 75 players, half of the remaining field, were unable to complete the round. Scoreboard leader Kiradech Aphibarnrat of Thailand was 10 under through nine holes.

Schwartzel and Wu had a three-stroke lead on China's Liang Wen-chong (68), England's Lee Slattery (70) and Scotland's Scott Jamieson (72). They were one shot ahead of a group at 5 under, including Rafa Cabrera-Bello, who had a 67.

The Spaniard had a difficult journey to the tournament. His bag and passport were stolen, so he flew from London to Madrid and back again to get a replacement before the 13-hour flight to Kuala Lumpur.

''I was on a train going from my home in Switzerland to the airport and I had my bag stolen, so all my personal stuff – passport, money, credit cards, computer, camera, iPad – was gone,'' Cabrera-Bello said.

On Thursday, thunderstorms caused suspension of the first round with half the field still on the course.