Rice a 'hit' in spotlight at Pebble Beach 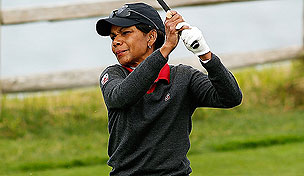 Getty Images
PEBBLE BEACH, CA - JUNE 18: Graeme McDowell of Northern Ireland lines up a putt with his caddie Ken Comboy during the second round of the 110th U.S. Open at Pebble Beach Golf Links on June 18, 2010 in Pebble Beach, California. (Photo by Jeff Gross/Getty Images)  -

PEBBLE BEACH, Calif. – The first thing Condoleezza Rice told playing partner Jason Bohn when she walked onto the practice green at picturesque Pebble Beach eased any tension in the group.

A smart move for the fellow Alabama fan.

Also maybe the lightest – and least nerve-racking – moment of her opening round Thursday, when the former Secretary of State made her most public outing on the course since becoming the first of two female members at Augusta National.

Rice started strong but was clearly rattled after she hit a woman in the head on an errant approach shot on the sixth hole. She faded before the turn and combined with Bohn for a 2-under 70 in the pro-am portion of the tournament.

''Somebody asked me, 'How did it compare to diplomacy?''' Rice said while walking off the 18th green. ''And I said, 'Well, I know how to do diplomacy, I'm not so sure about the golf course.'''

Rice's round started with a flurry and collapsed with a thud.

She chipped within 4 feet on the first and outdrove everybody on the second while hitting from the ladies' tee. Then she rolled in a 30-foot birdie putt, pumping her left arm in celebration. She kept almost everything in the fairway for another three holes.

The shot everybody in the gallery will remember most is the one Rice would rather forget.

Standing on the steep hill for a blind approach shot on the sixth, Rice hit a hybrid that sent the ball into the left side of the gallery about 50 feet away – and nowhere near the green more than 150 feet to the right.

The ball struck a spectator on her forehead, which gushed with blood and sent her to the ground to recover.

The woman wept in pain while her daughter applied towels and medical personnel hustled over. Rice apologized to the woman and had an assistant get her phone number.

The woman was later walking in the gallery when Rice finished on No. 18. She declined to give her name but told The Associated Press she was treated for a bruise and given pain medication. No stitches were needed.

''We didn't talk about it. We tried not to,'' said Rice's caddie, Kathryn Imrie, the assistant women's golf coach at Stanford, where Rice teaches and often mentors and helps recruit student-athletes. ''Obviously, she was really concerned. And for it not to bother her probably would be tough.''

Rice, 58, struggled to find a rhythm the rest of the way. She sprayed shots all over the course and even yelled out ''fore left!'' when the other amateur in the foursome, AT&T Chief Executive Randall Stephenson, hit a wayward drive on the 12th.

''If I were playing with Condi, I'd be thinking right,'' Stephenson quipped, referring to the Republican side of the political spectrum.

Others in the group, which also included Joe Ogilvie, seemed more relaxed on one of golf's most famous courses than the competitive former Secretary of State who served during the administration of former President George W. Bush.

Bohn said he was thrilled when the PGA Tour asked if he wanted to be Rice's partner after Davis Love III dropped out with a neck injury. Bohn said his family and friends were so excited they spent one night writing out a list of questions.

The two pros said Rice seemed more interested in talking golf than politics, and she spent most of the 5 1/2-hour round asking questions and looking for advice – maybe even more so once her game spiraled out of control.

''She got a little quick. I told her, 'Your backswing is a lot like diplomacy. They take awhile to get to where you want to go. So just slow it down,''' Ogilvie said.

Imrie said Rice, who began playing golf about 10 years ago and also trains under Eric Eshleman at the Birmingham Country Club, can sometimes play ''too quick.'' She has coached Rice for about 18 months and called her the ''perfect student'' because of her constant dedication to get better.

''She's serious, yeah,'' said Imrie, who was heading to the practice range with Rice after the round. ''That's why she is who she is.''

Rice, wearing a gray Stanford sweater that also had a Pac-12 Conference emblem, rarely took more than 20 seconds to hit after she reached for a club. She has club covers for Stanford (where she teaches), Notre Dame (where she earned her master's degree), Alabama (where she was born) and for Augusta (where she's a member).

''She's had to make quick decisions her whole life,'' said Janice Gistinelli, a friend who walked the course following Rice, whom she met doing interior design work on her home on the Monterey Peninsula.

Besides her political career, Bohn and Ogilvie seemed most interested in Rice's new golf membership.

In a historic change at one of the world's most exclusive golf clubs, Augusta National invited Rice and South Carolina financier Darla Moore in August to become the first female members since the club was founded in 1932.

Rice, also a member at Shoal Creek and Cypress Point, called the invitation an ''honor'' but said she doesn't view her Augusta membership as any kind of barrier-breaking achievement.

With at least two more rounds to play in the pro-am, those in her group still have plenty of other questions in mind.

Bohn said he only crossed ''a few'' questions off his list, which he didn't bring with him. He's still interested in her love of sports and her Augusta jacket – right down to where the emblem is placed. Whether Rice answers them before the Masters in two months is another matter.