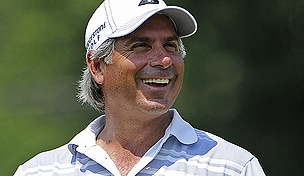 NEWPORT BEACH, Calif. – David Frost broke par for eighth time in 10 Champions Tour rounds this year, shooting an 8-under 63 on Friday to take a one-stroke lead over Fred Couples after the first round of the Toshiba Classic.

''I've been working on my game and I've worked with a guy in Germany since 2007,'' Frost said. ''I've really enjoyed the biomechanical part of the golf game. It's given me a lot more flow to the game.''

The South African had eight birdies in his bogey-free round, four on the first five holes on the back nine and another on the par-5 closing hole. Three of his approach shots stopped within a foot of the hole for tap-in birdies.

''I feel a lot more relaxed,'' Frost said. ''I don't feel too much pressure in my game, and it allows me a lot more freedom. And so what if I hit one or two bad shots. I feel that things are quite in place and until things really go wrong, then I'll start worrying.''

Frost has three victories on the 50-and-over tour. In three events this year, he has finished no worse than a tie for ninth and lost in a playoff to John Cook in Hawaii in the season-opening Mitsubishi Electric Championship.

Couples, the 2010 winner at Newport Beach Country Club, had eight birdies and a bogey. He's playing his second senior event and third overall tournament of the year after cutting his schedule to make sure he's healthy for the Masters. He made six putts from 15 feet or longer, including a 50-footer for birdie on No. 7.

''I made a mile of putts,'' Couples said. ''I just happened to make more putts than I expected to.''

It is an area of his game Couples has worked on the last two weeks, trying to ease the stress on his famously fickle back.

''I haven't played that much and I worked on my chipping and putting,'' Couples said. ''There are some delicate chips on this course.''

Jim Gallagher Jr. opened with a 66. He qualified for the event under the Career Victory Exemption List, but that status runs out after this event. He has a sponsor exemption next week in his home-state event in Mississippi.

''You know, you try not to think about it,'' Gallagher said about losing his playing status. ''It's there, I mean, I'm not stupid to it. But in my career I've played pretty good when my back was against the wall.''

Bernhard Langer topped the group at 67.