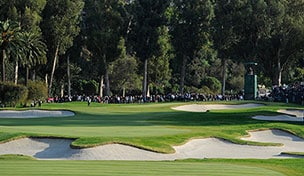 From Riviera’s short 10th hole and what many see as a shortsighted decision by the U.S. Golf Association to dump the Public Links championships, to Brandt Snedeker’s long view regarding preventive medicine and even longer delays at the Olympic golf course in Brazil, Cut Line covers the extremes of what was a busy news week.

Short and sweet. Riviera Country Club’s 10th hole is not the best 315 yards in the game but it is the most thought-provoking short par 4 on the play-for-pay circuit. And that’s even more evident in the wake of player push-back this week that suggests the 10th has slowly evolved from an easy “3” to a hard “4.”

“It’s not as fun because it's more of a struggle,” Fred Couples said on Thursday after an opening 68 at the Northern Trust Open.

A firmer, less-forgiving putting surface combined with the addition of a closely mown chipping area in recent years has certainly made the 10th more difficult but it’s impossible for armchair architects not to marvel at the short simplicity of the par 4.

Consider that the last five champions at the Riv are a combined 10 under par on the 10th and the hole ranked 360th out of 526 par 4s on Tour last year. In short, short doesn’t mean easy.

Or put another way, after watching his man make a mess of the 10th on Thursday, Brian Gay’s caddie Kip Henley said it best when he told The Associated Press: “This has got to be one of the top five holes on Tour. Maybe the best. And I'm saying that after my man made triple (bogey).”

The long view. For those who struggle to understand how Brandt Snedeker was able to finish second, second and first on his way to the DL with a sore rib consider the rocky rehab road the second-highest ranked American has been on in recent years.

In 2010 and 2011 Snedeker’s offseason featured major hip surgery and he missed the better part of three months last year with a cracked rib. So when he tweaked his rib earlier this season at the Humana Challenge there was concern. When the ailment resurfaced last week at Pebble Beach that concern lurched into preventive thinking.

“The key is to figure out A) what’s wrong, and B) what’s causing (the pain),” said Snedeker’s swing coach Todd Anderson. “He wants to be sharp and ready for Augusta.”

In this case Snedeker correctly followed the old axiom, no one has ever come back too late from an injury.

Tweet of the week: @BoVanPelt “On the first tee (Thursday) at Riviera my caddie mentions Ben Hogan. I look up and a hawk starts circling the tee. Pretty cool sight.”

Who said Tour pros are insular? Of course, we’re not sure the Hawk would appreciate the sentimentality.

Gone baby gone. Although the lines have certainly been blurred in recent years between a private and public player, news this week that the U.S. Golf Association will retire the U.S. Amateur Public Links and Women’s Public Links after the 2014 championships stirred mixed emotions.

Full disclosure, Cut Line is written most Fridays from a rough-around-the-edges central Florida municipal golf course before a nine-hole round with a bona fide group of “publinks” players that includes a retired New York City police officer, a former OB/GYN and an unemployed mini-tour hopeful (fill in your own punch lines).

Maybe it was time to retire the Publinks, and the addition of a men’s and women’s four-ball championship is intriguing, but the romantic concept of a true public champion earning an invitation to the Masters each year will be missed. Complicating the issue was the glossed-over announcement that left an empty feeling where nostalgia should have been.

“The Publinks almost had that feeling of trying to sneak one by you. You had the four-ball, which is great, but I feel when you have two newsworthy items they should be treated separately. Otherwise people feel you are trying to hide something.”

The hardest part now is hiding the news from the former NYC cop. He isn’t going to take this well.

When less is less. Although not a single member of the Q-School/Web.com Tour category earned a spot in this week’s field in Los Angeles via their status (a few are playing Riviera via sponsor exemptions and top-10 finishes last week at Pebble Beach) that is not out of the ordinary.

“Looking back at it, it appears it is very rare (for the Q-School class not to get into a 144-player field). It is tough on the West Coast, but that happens. You have certain events, like the Northern Trust Open, where you have to assume you won’t get in,” Tyler Dennis, the Tour’s vice president of competition, told Cut Line.

While the tight field in Los Angeles can’t be blamed on this year’s shortened season as the Tour transitions to a split-calendar season later this fall, not having the extra start next week because of the move of the Mayakoba Golf Classic to the 2013-14 lineup will have an impact.

The mathematical truth for this year’s Q-School/Web.com Tour graduates is they may be done playing on Tour for a few weeks.

Blame it on Rio. With apologies to the wrestling world, which turned its ire toward golf this week for being nixed out of the Olympics, golf has its own issues as we inch toward the 2016 Games.

The International Golf Foundation voiced concerns this week that construction at the Olympic course has not begun, although a spokesman for the Rio Games said everything was still on schedule for construction to start on the Gil Hanse design in April.