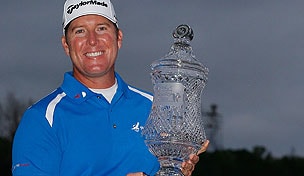 HUMBLE, Texas – D.A. Points can always find a ray of light in the darkest clouds.

He arrived at the Houston Open having failed to break 70 in his last nine rounds on the PGA Tour. He had made only two cuts in nine tournaments this year, both times finishing at the bottom of the pack. All that changed Sunday, even after a final round most appropriately delayed by thunderstorms.

Points returned from the long delay by making four pars, and the last one from just outside 12 feet gave him a one-shot victory in the Houston Open.

It also provided another two-year exemption on Tour. He gets to start next year in Hawaii.

And he's on his way back to Augusta National for the Masters.

''I never count myself out,'' Points said. ''I never just chalk it up like, 'Oh, this year is over with.' I've never felt like that. I was just grinding, just trying to wait and try to find that one thing that like, 'Boom! There it is.' And there I go. Fortunately, it was this week and I capitalized on it.''

He made it hard on himself in a final round at Redstone where a dozen guys felt as if they had a chance to win on the back nine. Only in the final hour did Points seize control, and then he had to work hard not to lose the lead.

A 5-iron to the 17th came up 40 yards short of his target, and he chipped up to tap-in range to take a one-shot lead to the tough 18th. He hit a hybrid from 231 yards that nearly went into the bunker, leaving another long chip. This one came up shorter than he wanted, but the putt was true.

''I've been having a really tough year,'' Points said. ''To have a putt to win, you want that starting out every week. I would have liked for it to have been closer.''

Points closed with a 6-under 66, the final putt helping him avoid a playoff with Masters-bound Henrik Stenson and Billy Horschel.

Stenson birdied his last two holes for a 66 before the storms rolled across Houston, and while he came up one shot short, he moved up to No. 42 in the world ranking to earn an invitation to the Masters. Horschel was on the 18th tee when play was halted, and then had to wait some more for his turn to hit on the tough driving hole. He split the middle, found the green and two-putted for par to join Stenson in the clubhouse lead.

They waited around for a playoff that wasn't necessary when Points saved par on his last two holes.

Points, who finished at 16-under 272, picked up his second PGA Tour victory, and this time he had to supply his own comic relief. He won two years ago with actor Bill Murray as his partner in the Pebble Beach National Pro-Am. When the tension mounted, Points flashed his caddie an exaggerated smile to help keep it all in perspective.

It worked, and now they can smile all the way to Augusta.

''I never not think it's on my radar,'' Points said of his last-minute entry to the Masters. ''I want to win. I want to win more than once. I want to have the opportunity to win majors, and win majors. I want to play in Ryder Cups and Presidents Cups. These are things I want to do, and I know I'm capable of doing.''

Twenty players were separated by four shots going into the final round, and it stayed that way for a while, with a dozen players poised to make a run and seize control as the storm clouds gathered.

Phil Mickelson opened his final round with four straight birdies, and he was still in the picture until a three-putt double bogey on the 14th hole. He had a 68, and wound up six shots behind. Dustin Johnson had the lead at one point until he missed a short birdie putt on the 11th, and then hit his 5-wood into the water on the reachable par-4 12th hole, leading to bogey. He wound up with a 65 and finished two shots behind.

Ben Crane, who played alongside Points, had birdie chances on the last two holes that would have dropped if he had hit them hard enough. Crane had a 68 and tied for fourth with Johnson.

Kevin Chappell was briefly tied for the lead. He had a 68 and tied for sixth, along with Brian Davis (67) and Stewart Cink (70).

Cink started the final round tied for the lead. Cink returned from the delay by making a 5-foot par putt, an 18-foot birdie putt and a 10-foot par save on the 17th to get within two shots of the lead. He needed Points to make bogey on the last hole to have any chance, and was on the tee when he heard the cheer for a par. Cink put it into the bunker off the tee and near the green and made his only bogey of the day.

Jason Kokrak needed a birdie on the 18th to have any chance at a playoff and yanked his tee shot into the water. Steve Wheatcroft, the Monday qualifier who started Sunday one shot out of the lead, had a 74 to tie for 22nd. The good news is that the tournament ended on Sunday, giving him time to make the next Monday qualifier in San Antonio.

Rory McIlroy was long gone, on his way north to San Antonio, when all this was going on. The world's No. 2 player closed out his week at the Houston Open by making a 25-foot birdie putt for a 70 and a tie for 45th. McIlroy will play the Texas Open next week before heading to the Masters.

The consolation prize went to Stenson, who figured he would need to finish in the top 10 to crack the top 50 in the world in the final week that Augusta National uses the world ranking to fill out the field. He did even better, nearly winning the tournament.

It wasn't so nice for Charles Howell III, who rallied with a 66 but still wound up four shots away from where he needed to finish to get into the top 50. Howell, who grew up in Augusta, will miss the Masters for the fourth time in the last five years.

''I'm not going down the road of disappointment,'' he said. ''I played good. I would love to be in the golf tournament. So would 300 million other golfers. I played well this year and I'm going to watch the tournament on TV. It's just horrible to watch on TV, to be honest.''