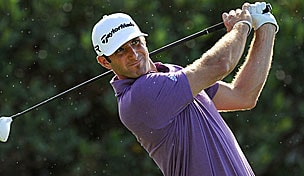 PALM BEACH GARDENS, Fla. – At last week's WGC-Accenture Match Play Championship, Dustin Johnson had the unfortunate distinction of being the only player in the 64-man field not to win a single hole, losing his opening match 6 and 4 to Alexander Noren. Thursday, he was able to bounce back, opening with a 4-under 66 at the Honda Classic.

'I played really well,' Johnson told reporters after a round that included five birdies against just a single bogey. 'Any time you shoot under par out here, I think you're playing well.'

Known as one of the more powerful players on the PGA Tour, Johnson explained that one of the keys to his round was actually to scale back his tee shots.

'You've just got to play the golf course as it comes to you. There's a lot of holes where I just can't hit driver. There's nowhere to hit it,' he noted, having found 10 of 14 fairways in his opening round. 'I think I hit five drivers, a lot of 3-woods, and a 5-wood or two, and just tried to get it in the fairway.'

With some unexpected time off following his opening-round loss at Dove Mountain, Johnson spent the week working with his swing coach in an effort to get his 2013 season back on track.

'I've been doing a lot of work with Claude (Harmon) and just getting a little more practice in,' explained Johnson, who has made only one cut in four stroke-play starts since claiming the season's first event at Kapalua. 'I had the lefts going, and it was with every club in the bag.'

Playing alongside Tiger Woods and Martin Kaymer for the first two rounds at PGA National, Johnson noted that he enjoys the opportunity to pair with the No. 2 player in the world.

'I like playing with Tiger. He's a good buddy of mine,' he added. 'We have a good time out there, and then obviously it's great to have all the fans come out and watch.'