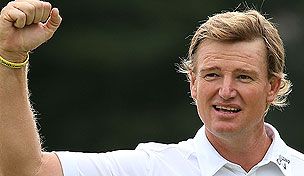 The big South African, who had dropped to No. 68 in the world earlier this year, vaulted to No. 15 in the latest rankings released Monday. He entered British Open week ranked 40th.

At the top of the rankings, Luke Donald remained No. 1 after tying for fifth at Royal Lytham, while Tiger Woods moved into the No. 2 spot after his T-3, his best finish in a major since the 2009 PGA Championship. This is the highest Woods has been ranked since December 2010, after the Chevron World Challenge.

The rest of the top 5 is Rory McIlroy, Lee Westwood and Webb Simpson, respectively.

Despite his final-round collapse, Adam Scott still moved from No. 13 to No. 6 in the world.

After his victory at the True South Classic – last week’s opposite-field event on the PGA Tour – Scott Stallings jumped from 179th to 121st in the rankings.