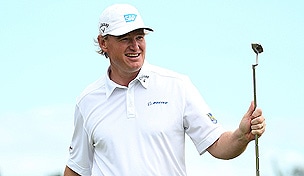 Is Ernie Els phasing out the belly putter?

It sure appears that way, as the Big Easy said that he will use the conventional putter at this week’s Asian Tour event in Thailand.

Els has repeatedly expressed his opposition to the possible rule change that would prohibit anchoring a club to the body during a stroke. But even though he will put the conventional putter in the lineup this week, Els isn’t ready to leave the belly putter at home during Masters week.

“Even if I won here this week, I will use the belly putter at the Masters simply because the greens are so quick over there,” he said, according to comments released by tournament organizers. “But after the Masters, I’ll try to use the short putter more regularly.”

Last year, Els became the third major champion to use a belly putter when he captured the British Open at Royal Lytham. But with the governing bodies set to rule on anchoring, he appears to be preparing himself for the switch.

Earlier this month at Doral, Els said that he was seriously considering the move and was working out an Odyssey Black #1.