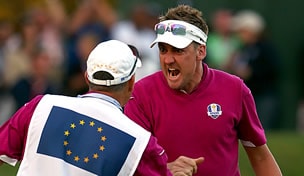 Getty Images
MARANA, AZ - FEBRUARY 28: Stewart Cink watches his tee shot on the first hole during the semifinals of the Accenture Match Play Championship at the Ritz-Carlton Golf Club at Dove Mountain on February 28, 2009 in Marana, Arizona. (Photo by Scott Halleran/Getty Images)  -

No, Ian Poulter doesn’t pop in the Ryder Cup DVD and watch it every morning for motivation. In fact, he has only seen highlights from Medinah twice, and one of the times it was in Spanish, and he couldn’t understand a word, but he stared at his laptop for an hour, entranced, and wondered why he couldn’t summon that inspired play more often.

“I have to sit down and work out what happens to me,” Poulter said Tuesday on “Morning Drive.” “My mindset changes very much and I need to do that in stroke play. If I can raise my game like I do in match play, then anything is possible.”

There’s a reason Poulter, 37, is taking six weeks off after the season-opening Hyundai Tournament of Champions, where he tied for ninth.

Though it’s unrealistic for him to emote the same way at a regular PGA Tour stop, Poulter concedes that he needs to “work out what it is, what mindset I can get myself into to transfer that (energy).”

A 12-time winner on the European circuit, Poulter has won twice on the PGA Tour, both of which were WGC events, the 2010 Accenture Match Play and last year’s WGC-HSBC Champions.

Now ranked 12th in the world, Poulter’s aim during the offseason was to improve his proximity to the hole. Last year, he ranked 80th in that statistic, at 35 feet, 7 inches, and consequently struggled in par-5 scoring (134th on Tour).

But here’s the thing: Poulter was No. 1 in scrambling. So this season, he has vowed to change his approach on the par 5s to be more aggressive and rely on his ability to get the ball up-and-down from around the greens. His 2013 season resumes in two weeks at the WGC-Accenture Match Play.

“I always try to lay up to a certain number (on the par 5s) and that doesn’t work,” he said. “If my scoring clubs are from 100 to 150 yards, and that’s where you make most of your birdies, then if that proximity is closer I will become a better player.”

Which could transform the Englishman from merely a Ryder Cup hero to perennial PGA Tour threat.