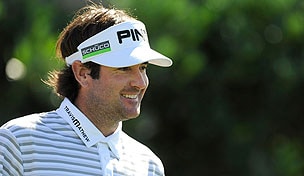 This week marks the beginning of the 2013 PGA Tour season, as winners from the previous year have gathered in Kapalua for the Hyundai Tournament of Champions. Each week, a panel of experts will offer up their picks from four groups of players based on Golf Channel's new fantasy game, Fantasy Challenge. We will also keep track of their scores and standings. The panel includes: senior writers Rex Hoggard, Randall Mell and Jason Sobel; contributors John Hawkins and Win McMurry; editorial director Jay Coffin; 'Morning Drive' host Gary Williams and staff writer Ryan Lavner.

Group 1: Bubba Watson: No secret here, the Plantation Course at Kapalua is a bomber's paradise. The layout ranked second on the PGA Tour last year in longest drives, and Watson is the quintessential bomber. Enjoy the show.

Group 2: Steve Stricker: Although Stricker likely spent more time in a deer stand than on a practice tee this offseason, he won the opener last year and finished 2012 strong with an eighth-place finish at the World Challenge.

Group 3: Ian Poulter: No, the Hyundai Tournament of Champions did not transition to match play this year, although that would add a measure of intrigue to the opener. But Poults' Ryder Cup romp is still fresh, making the Englishman one of the game's most confident players.

Group 4: Jonas Blixt: He didn't win the 2012 Rookie of the Year Award, but he probably should have. Last year's Frys.com Open winner is poised for a breakthrough season.

Group 1: Keegan Bradley: Big hitter on a long course. Most guys limp into Kapalua cold; he'll be ready to go.

Group 2: Ryan Moore: Late-season win may give momentum to produce a big 2013, something we've been waiting on for a while.

Group 3: Scott Piercy: My pick for a breakthrough season and my pick to win this tournament. Watch out, there's lots of talent there.

Group 4: Marc Leishman: Ever since Stuart Appleby was winning here all the time, I've liked going with Aussies playing in what is naturally their summer.

Group 2: Steve Stricker: The 45-year-old is scaling back his 2013 schedule, but he wouldn't dare skip Kapalua. In his past four starts there, he has a win, a runner-up and two other top-10s.

Group 4: Jonas Blixt: Another late-season bloomer who had five top 20s in his last six starts, including a win at the Frys.

Group 1: Matt Kuchar: Kuchar is comfortable on the Plantation Course, where he finished third in 2010 and T-6 in 2011. Scrambling is also key, as four of the last seven winners led the field in the category and Kuch finished 2012 ranked seventh overall in the stat.

Group 2: Steve Stricker: Three times since 2005 a defending champion has won at Kapalua, so it's not such a long shot to predict Stricker to repeat. He already has a runner-up finish on this track in 2008. Proximity to the hole is a nice stat to have on your side this week, considering the sizable greens, and the Wisconsinite led the Tour in it last year.

Group 3: Ian Poulter: The fierce competitor can shine in the elite field this week where he finished T-6 in his only previous appearance (2011). He's been hot in the 'off' season, igniting a run overseas with his win at the WGC-HSBC Champions. I also like that he ranked second in scrambling last year.

Group 4: Jonas Blixt: The first-timer in Maui brings a solid resume to a course that ranked second-longest in proximity to the hole on approach last year. In 2012 he led the Tour in sand saves, was 16th in scrambling, 14th in par-breakers and second in strokes gained putting.

Group 1: Jason Dufner: Perhaps the most consistent player on Tour last year. His all-around game - and high birdie average - should both help him start his 2013 season on the right foot in his first trip to this winners-only event.

Group 2: Dustin Johnson: One of the hottest golfers down the stretch of 2012. Finished second in par-5 birdies or better, which should serve well on a Plantation Course that features five such holes.

Group 3: Scott Piercy: Quietly advanced all the way to the Tour Championship during the FedEx Cup playoffs last year, and his length off the tee will be a strong asset this week.

Group 4: Jonas Blixt: Made a huge jump in 2012 and may be set for an even bigger one in 2013. Will likely spend much of the early season aggressively pursuing a win - and The Masters berth that goes along with it.