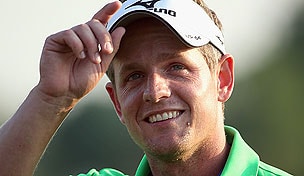 This week the PGA Tour heads to historic Riviera Country Club outside Los Angeles, where Bill Haas will defend his title at the Northern Trust Open. Each week, a panel of experts will offer up their picks from four groups of players based on Golf Channel's new fantasy game, Fantasy Challenge. We will also keep track of their scores and standings. The panel includes: senior writers Rex Hoggard, Randall Mell and Jason Sobel; contributors John Hawkins and Win McMurry; editorial director Jay Coffin; 'Morning Drive' host Gary Williams and staff writer Ryan Lavner. They will also be joined by former 'Saturday Night Live' star Norm Macdonald, who will serve as a celebrity guest throughout the fantasy season.

Group 1: Luke Donald: Last year's champion, Bill Haas, ranked first in putting at Riviera for the week and after Brandt Snedeker (who is taking the week off), Donald is the game's best with the flat stick.

Group 2: Peter Hanson: Makes his 2013 PGA Tour debut this week, but has already had a solid start to the season, having finished tied for ninth in Abu Dhabi and T-22 at the Qatar Masters.

Group 3: Geoff Ogilvy: Although his move back to Scottsdale hasn't translated into better results on Tour (he has missed three cuts in four starts), the Australian plays his best on classic layouts like Riviera.

Group 4: John Mallinger: The SoCal resident has never played well in Los Angeles, but he has historically posted his best finishes on the West Coast and is due for a solid week.

Group 1: Luke Donald: First start of the season doesn't scare me, because I know he's been outworking nearly everyone else during his time off.

Group 2: Hunter Mahan: I was on him last week when he was in contention going into the weekend at Pebble. He's ripe for a West Coast win, and getting to pick him in Group 2 is a steal.

Group 3: Bryce Molder: Really liked the way he finished at Pebble, with four birdies in his last five holes. Look for the momentum to continue this week.

Group 4: Patrick Cantlay: Bargain basement steal of the week with the L.A. kid playing some impressive golf coming into his hometown event.

Group 1: Bubba Watson: With a T-4 and 15th-place finish this year, added to how he closed out 2012, Bubba has finished inside the top 25 in nine of his last 10 starts on Tour. He has three top 20s at Riviera since 2008, including a T-13 finish last year. Left-handers have fared well here, wiht both Mike Weir and Phil Mickelson going back-to-back for a total of four wins ont he property over the last decade.

Group 2: Jimmy Walker: He's certainly not the biggest name in this group, but he has it all coming into this week at a place where he has finished T-4 the last two years. And this year, he has a T-4 finish at Torrey Pines to go with a T-3 this past week at Pebble Beach.

Group 3: Bryce Molder: He's quietly been putting together a great season thus far and is 12th in driving accuracy and third in strokes gained putting. Three of his four starts this year have resulted in top 25s, including a T-12 finish last week at Pebble. He has played well in the past at Riviera as well, as evidenced by his T-17 result last year and a T-32 finish in 2010.

Group 4: Fred Couples: The sentimental pick here, but of all the guys in Group 4 he has the most consistent recent history here at Riviera, wiht four top 10s in the last 10 years. As recently as 2011, Couples was in contention heading into Sunday before finishing T-7. In his one start this season on the Champions Tour, he finished fourth at Hualalai.

Group 1: Charl Schwartzel: Here's a guy even hotter than Sneds - in his last six worldwide starts, Schwartzel has gone 2nd-1st-1st-2nd-T3-5th.

Group 2: Jimmy Walker: Has top 4s in two of his last three starts, and at Riviera has T-4s in each of his last two appearances. Could get his first win this week.

Group 3: Kevin Stadler: Has a T-11 and T-3 in his last two starts. Decent record at Riviera, too, with top-25 finishes in each of his last three appearances.

Group 4: James Driscoll: Not much to choose from here, but going with Driscoll, who has made the cut in three consecutive starts, including a T-9 finish last week at Pebble.