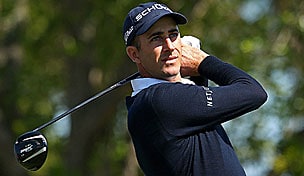 This week the PGA Tour heads to Texas for the first time in 2013, as Redstone Golf Club plays host to the Shell Houston Open. With many players using this event as final preparation for The Masters, conditions on and around the greens are expected to emulate those that participants will likely encounter at Augusta National in two weeks. With that in mind, here is a look inside the numbers to see which players may contend for the title and help your Golf Channel Fantasy Challenge team in the process:

• Geoff Ogilvy is in the field this week in Humble in the hopes of securing a spot in the season's first major. Currently No. 50 in the world, Ogilvy will need to remain inside the top 50 through this week's event in order to earn an invitation to the Masters next month. There's reason to think he'll find success at Redstone; in six starts here since 2003, the Aussie has four top-10 finishes, including a runner-up showing in 2008.

• Having missed last year's event, Chris Kirk returns to Redstone for the first time since his runner-up finish here in 2011. Kirk, who was second to Brandt Snedeker earlier this year at Pebble Beach, led the field in GIR percentage in Houston two years ago, reaching 63 of 72 greens in regulation en route to becoming the only player in the field with four rounds in the 60s.

• After two seasons on the Web.com Tour, Brian Stuard has made his return to the senior circuit a memorable one. His tie for 16th at Bay Hill was his sixth top-30 finish in eight starts to begin the year, including three top-10 finishes, and he now finds himself ninth on Tour in the all-around ranking and 10th in strokes gained putting.

• Winning at Redstone will likely require making birdies in bunches, but perhaps an even stronger emphasis will be placed on avoiding bogeys. Since the course began hosting this event in 2003, only one champion has made more than seven bogeys all week en route to victory (Paul Casey won in 2009 despite 10 total bogeys). Last year's champion, Hunter Mahan, made only two bogeys all week against 18 total birdies.

• Though his tie for 50th at Bay Hill broke a streak of four straight top-25 finishes, Graham DeLaet has nevertheless compiled some impressive stats through nine starts this season. The Canadian, who tied for ninth at both the Farmers Insurance Open and Honda Classic, currently leads the Tour in ball-striking, a metric comprised of total driving - where DeLaet ranks second - and GIR percentage, where he is currently fifth.