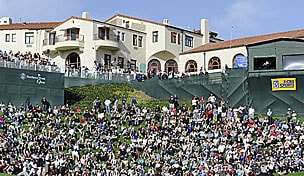 LOS ANGELES – The Northern Trust Open’s first round was suspended Thursday because of fading light in a heavy fog at Riviera Country Club.

Play was called at 5:43 p.m. local time. Eighteen players were on the course when play was halted. They’re scheduled to be back in position Friday to finish the first round at 7:20 a.m. local time. The second round will begin as scheduled at 6:40 a.m.

Charlie Beljan, two shots off the lead when the horn blew, finished out the final hole. He three putted for bogey, finishing with a 4-under-par 67, good for a tie fourth.