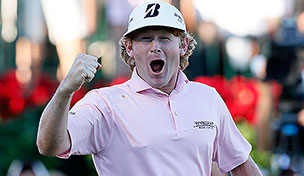 KAPALUA, Hawaii – When asked what most people think when they see Brandt Snedeker walking down the fairway, Snedeker casually offers, 'Probably the guy who won the FedEx Cup last year. About the only thing you can say.'

It's not the only thing you can say about Sneds, but it does say a lot about his humility.

Snedeker is a four-time champion on the PGA Tour, was rookie of the year in 2007 and has earnings of nearly $17 million. Yet, his outlook on 2013 and expectations for himself remain more humble than heroic.

Snedeker did just that last year at the British Open – he held a one-shot lead through 36 holes at Royal Lytham & St. Annes – and looks forward to getting back into the major mix. Namely, he likes his chances at The Masters and the U.S. Open, courses (Augusta, Oak Hill) where he has a lot of experience.

'I feel like I know (Augusta) well enough and I've played it enough to feel like I've got a good handle on that golf course. ... And Oak Hill is a course I've played a bunch and feel comfortable on and like.'

Who knows, maybe a few months down the road, Snedeker will give spectators something else to talk about.