David Feherty Ushers in One of the Golf Season's Busiest Weeks 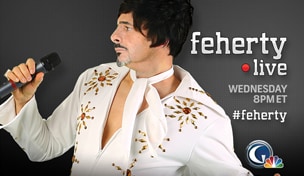 Getty Images
PEBBLE BEACH, CA - JUNE 14: Patrons photograph Tiger Woods as he plays a tee shot during a practice round prior to the start of the 110th U.S. Open at Pebble Beach Golf Links on June 14, 2010 in Pebble Beach, California. (Photo by Scott Halleran/Getty Images)  -

On the eve of the PGA Merchandise Show when thousands of golf-industry insiders will descend upon Orlando, FL, golf’s funnyman David Feherty will be on-the-scene hosting the third installment of Feherty Live. Held at the Hard Rock at Universal Orlando Resort in front of a packed studio audience, David Feherty Live from the Hard Rock will be the first ever truly LIVE performance of Feherty’s popular Golf Channel show. Feherty’s irreverent and off-the-cuff humor will be on full display as he conducts compelling interviews in his trademark style with big names from the golf world. David Feherty Live from the Hard Rock will air LIVE on Wednesday, January 23 at 8PM ET only on Golf Channel.

Anything could happen during David Feherty Live from the Hard Rock when Feherty sits down with Hall of Famer Lee Trevino, nine-time Major championship winner Gary Player, Ryder Cup hero Ian Poulter and world-renowned golf instructor Butch Harmon. Knowing Feherty, you can also count on a few additional surprises and hijinks! Watch it all play out during Feherty’s LIVE primetime special on Wednesday, January 23 at 8PM ET.

And don’t miss the debut of the third season of Feherty on Monday, February 25 at 10PM ET on Golf Channel. Jack Nicklaus, Phil Mickelson and Tim Finchem are just some of the guests who will join Feherty during this upcoming season.