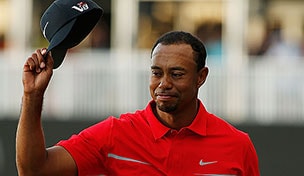 Getty Images
PEBBLE BEACH, CA - JUNE 19: Paul Casey of England walks off the second tee during the third round of the 110th U.S. Open at Pebble Beach Golf Links on June 19, 2010 in Pebble Beach, California. (Photo by Donald Miralle/Getty Images)  -

Before the PGA Tour transitions to Texas and beyond, Cut Line takes a look back at the good (Tiger Woods), the not so good (Phil Mickelson) and the downright ugly (Rory McIlroy) of the Florida swing.

Sunshine and the status quo. Following an eventful West Coast weather-wise, the Florida swing provided some stability (at least there were no snow delays), as well as a bit of competitive clarity and its share of curious moments.

Tiger Woods reestablished himself atop the Oficial World Golf Ranking with signature victories at Doral and Bay Hill and prompted more “is he back?” talk (as if he ever went anywhere).

At the other end of the competitive landscape, Rory McIlroy lost the No. 1 ranking and a few style points after bolting the Honda Classic 26 holes into his week with an ailing wisdom tooth; and Phil Mickelson proved as volatile as ever with his tie for third at the WGC-Cadillac Championship and an unsightly missed cut at the Arnold Palmer Invitational.

The Florida swing may no longer be the unofficial start of the Tour season, but it certainly started people talking about the season ahead in 2013.

Timing. For those scoring at home, the next few weeks promise to be eventful whether the Masters lives up to expectations or not.

In no particular order, the USGA and Royal & Ancient will announce a final decision on the proposed anchoring ban (the loose timetable for the announcement has been this spring) and the PGA Tour will rule on the Vijay Singh deer-antler spray doping case.

If Singh is found guilty of violating the Tour’s anti-doping policy the circuit will make the fine public according to its own regulations. If he is deemed to be innocent the Tour will say nothing, although its silence will speak volumes.

And if all that weren’t enough to keep fans tuned in, the Masters is a fortnight away with the promise of something special, again. Few events produce drama with such on-demand regularity, and the powers that be at Augusta National already have things moving in the right direction with news this week that the club’s famous chicken sandwich will return to the Masters menu in 2013.

Even better will be the price for that deep-fried goodness: $3.

Tweet of the week: @JasonDufner “What can I say, I was tired, my back hurt from sitting on the floor, and we were talking about relaxation and focusing. #dufnering”

Slow study. To be clear, the Tour’s decision to embark on a yearlong study of pace of play will prompt more than a few punch lines (a year to study slow play, really?). But at least Ponte Vedra Beach, Fla., has embraced a leadership role in what is considered one of the game’s biggest issues.

What comes from the study – which was explained to the members of the Tour’s player advisory council and policy board last week at Bay Hill – remains to be seen, but at least they are talking.

“Torrey Pines (South Course) is everything that is wrong with our sport. It used to be a nice 7,000-yard golf course; now it’s a monstrous 7,600 yards. Golf courses have gotten too hard for the masses,” said Paul Goydos, one of four player directors on the policy board. “At some point in time golf course architects need to understand that 'hard' and 'good' are not synonymous.”

Lefty wondering. We’ve seen this act before: Lefty spends the weeks leading up to the Masters tinkering and toying with his swing and then flips the switch the moment he motors down Magnolia Lane.

At Bay Hill, Lefty finished his Thursday round with consecutive three-putts and recorded a four-putt (actually, it was a five-putt from the fringe) on his way to a Friday 79 and a missed cut. This week in Houston Mickelson rallied to make the cut on Friday but he was far from sharp.

But know this, as scratchy as Mickelson has appeared this spring his formula is hard to question. Consider that he has not missed a cut at Augusta National since 1997, he has finished outside the top 30 just once since then and has collected three green jackets since 2004. There is always a method to Lefty’s madness.

Contracts. Because of small print in the deal between the Tour and the Texas Open this year’s Shell Houston Open was moved ahead one week on the schedule, out of its normal spot the week before the Masters, and replaced by the San Antonio stop.

Although the field in Houston didn’t take a hit because of the scheduling switch, it did seem to throw off the flow of what has become a tradition unlike ... well, you know.

Many players, including Mickelson, have used Houston as a tune-up for the year’s first major and organizers at the SHO have embraced the concept and dialed up green speeds at Redstone Golf Club to accommodate the Masters-bound masses.

But this year players and fans are left with an awkward flow which brings Cut Line back to a common concern – the Tour schedule should be based on competitive integrity, not contractual convenience.