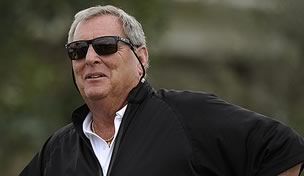 Two-time major champion Fuzzy Zoeller does not believe any member of the main attraction of Tiger Woods, Phil Mickelson and Bubba Watson will emerge victorious in the 112th U.S. Open at The Olympic Club.

'For a golfer, just to hit the fairway, that's the toughest part – get the ball in the fairway so you can hit that second shot to the green.'

Zoeller said confidence was instrumental when he won the 1984 U.S. Open at Winged Foot in a playoff over Greg Norman. That confidence, he says, seems to be missing from the reigning Masters champion.

'When you stand on the tee and have a good feeling about the shot you have to play,' Zoeller said, 'unlike what Bubba is saying out there in San Francisco right now, that plays to an advantage to a player.'