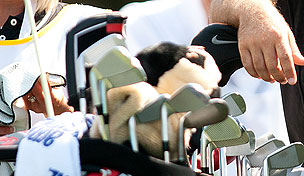 It was announced by the International Olympic Committee this week that wrestling has been recommended to be dropped from the Olympic Games following 2016. The decision has a lot of people in tight unitards threatening to leap off the top turnbuckle and throw a flying elbow at the sport of golf.

Yeah, yeah, yeah. I get it, Hulkamaniacs. Wrestling doesn’t always involve guys slamming steel chairs into each other’s backs while 13-year-olds with a distorted view of reality shriek in delight. It’s a real sport which has been included in the Olympics since the days Zeus was still chucking thunderbolts at his competition.

I’m not here to argue that point. Mostly because I don’t want you to put me in a figure-four leglock.

My problem is that much like the muscle-bound gym rat who loses his girlfriend to the classy gentleman with a sublime short game, you’re taking your anger out on the wrong party.

Dudes, it’s not our fault the IOC likes us better than you.

A few years ago, some of the biggest names in golf made their pitch as to why the sport should be added to the current lineup and the proposal was accepted, beginning with the 2016 Games. That proposal included video presentations, written documentation and first-person anecdotes. At no point did it ever include the words: “We’re cooler than wrestling, so just get rid of those guys.”

And yet, in the aftermath of the IOC’s announcement this week, the debate has somehow become You against Us. Just like The Rock (one of your guys) growled in the 2010 film “Faster,” golf’s attitude toward wrestling is, “Brother, I ain’t got no beef with you.”

The feeling isn’t mutual. Ronda Rousey, who in 2008 became the first American woman to win an Olympic medal in judo, said of the decision, “If you don't break a sweat, it's not a sport; it’s a skill. There's certainly skill in golf, but wrestling is one of the most basic sports. It's one of the root sports in the Olympics and I think they're destroying part of their history by getting rid of it.'

Help me, Ronda. I don’t want to get into the whole, “Is golf a ‘real’ sport?” argument, but I’ve been known to break a sweat putting together an Ikea bookcase – and that sure as hell shouldn’t be an Olympic event (on second thought …).

Instead of golf, why don’t you go after rhythmic gymnastics or equestrian dressage? I mean, even walking is in the Olympics. How is that more of a sport than golf? At least we’re doing something useful while we walk.

The biggest complaint from the pro-wrestling crowd – which is completely different from the pro wrestling crowd – is that anyone can grapple with another human, but only a select few have the means to play golf. While I can’t argue with the first part of that point, I’ve always contended that golf is one of the world’s most diverse sports, with world-class players coming from all corners of the globe and various backgrounds.

Lee Trevino worked in cotton fields at age 5 and later shined shoes to earn money to play the game. Chi Chi Rodriguez’s first golf club was actually a branch from a guava tree. Vijay Singh couldn’t afford golf balls, so he used coconuts instead. All three are members of the World Golf Hall of Fame.

Still, golf carries the stigma of being an elitist sport, one of the main reasons why wrestlers believe they’re more entitled to a place in the Olympics.

But it’s not just folks in singlets who are going for the takedown. Dan Wetzel of Yahoo! Sports is one of the best in the sportswriting biz, and this week he took offense to golf being next on the tee.

“Golf is an old, simple pursuit itself, invented by bored Scottish sheepherders,” Wetzel wrote. “It's done fine, however, without the Olympics. And while the Games should aim to stay current with the times, golf isn't half-pipe snowboarding, a sport the next generation of kids is suddenly into. Golf is actually losing players in many countries.”

So let me get this straight: Because our game is losing players in many countries, it shouldn’t be considered for inclusion in the Olympics? Um, isn’t that the very reason why it should? Correctly or incorrectly, those who argued for the sport to be added contend that this will lead to a global boon that it desperately needs.

And unless I’m missing something here, wrestling isn’t exactly flourishing at the youth levels. If popularity with kids was the main reason for inclusion, then the IOC should add sleeping, texting and Angry Birds to the next Olympics, too.

Look, as a sport that hasn’t been included in the Summer Games since 1904, we feel for the wrestling community that’s gotten pinned on a surprising reversal. But don’t blame us for your misfortune. This is a fight that you need to take up with the IOC, not golf.

Besides, you don’t want a piece of us. You guys may not get to use steel chairs, but we come armed with plenty of clubs.