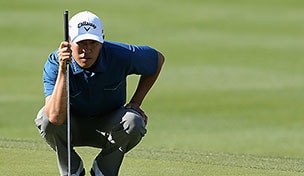 SCOTTSDALE, Ariz. – When does a player shoot a final-round 62 and get remembered for something other than his score? When he celebrates a birdie on golf’s most populated hole by doing the Gangnam Style dance.

That summed up James Hahn’s day at the Waste Management Phoenix Open, as he punctuated a 19-foot putt by showing off his dance moves.

“Every time that song comes on, my friends want me to do the dance,” he said afterward. “It’s like, ‘James, it’s your song. You have to dance.’ And I seriously don’t know how to do the dance. So I was like, I think this is what he does. I’ve seen it a couple of times. It’s all fun. Even if I didn’t do it correctly, I was committed to putting on a show.”

Hahn maintained it was a spur-of-the-moment gesture, that he had also thought about mimicking Aaron Rodgers’ discount double check or doing a Tebow on the green.

“It’s once a year, one hole, let’s just enjoy it,” he explained. “How many golfers around the world talk about what they would do on 16 if they birdied in the final round? It’s every kid’s dream to do something funny or crazy. That was my inner child coming out.”

As to all the attention he’s getting from the dance, Hahn said he wasn’t exactly ready for it.

“I’m actually a little embarrassed,” he said, “but I’ll just soak it in.”