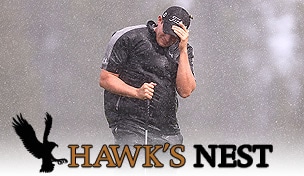 NOTHING FREAKS ME OUT quite like the giant pile of mail collected by our neighbor while we’re away for Christmas. All those unpaid bills and holiday cards featuring photos of kids growing up way too fast – it doesn’t seem right that a man can feel old and broke at the same time.

This year’s stack featured a package from a friend in the golf industry. I tore it open to find two pairs of performance socks, one in gray, the other in white, and though neither came with an instruction manual, I was amused to see each sock conspicuously marked as “LEFT” or “RIGHT.”

Like most mortals, I put on my socks one leg at a time, but I certainly don’t need them giving me orders. Anyway, I went along with the program and found some sneakers, then headed downstairs to the exercise bike, where it was never a contest. I believe the Christmas calories closed out the new footies on the 14th green.

Honestly? I don’t want my socks to perform. Sammy Davis, Jr. was a performer. The Flying Wallendas? Performers. All I ask of my socks is that they hang out together in one place – and not disappear somewhere between the hamper and the bedroom dresser.

THERE WAS A lengthy period last Sunday when I thought the year’s first golf tournament would also vanish. As much as I disapprove of the PGA Tour season beginning while the confetti is still being swept up in Times Square, I’m certainly satisfied with how Camp Ponte Vedra handled a difficult situation, insisting on 54 holes and adding an extra day of play, travel schedules be damned.

The two false starts (Friday and Sunday) don’t bother me in the slightest – not when they occur with an ultra-small field in the first round. Last year’s West Coast swing was played without a single weather delay, which is rare, as is any suspension of play at Kapalua. On my four or five trips to the northwest tip of Maui, however, I do recall a hearty breeze and more than an occasional shower. Paradise with a mean streak.

Honolulu is full of cement, commotion and lousy take-out, but Waialae CC, home of the Sony Open, is the flattest course the Tour plays all year, and thus, a more accommodating, competitive-friendly environment. If Tiger Woods and Phil Mickelson no longer show up at Kapalua for myriad reasons – too far, too early, too hilly, too windy – Mother Nature’s antics last weekend surely did nothing to persuade them otherwise.

OF COURSE, THERE’S no Tiger at the Sony, either, but it did rain cats and dogs at Waialae a couple years back. Looking at all weather-related stoppages on the West Coast over the previous six seasons, you might be surprised to learn that just one of the eight events has a spotless record over that stretch:

For all that data and whatever conclusions might be drawn, Torrey Pines probably earns the prize for the sloppiest overall conditions of the bunch, with Riviera ranking a reasonably close second. An Englishman named Albert Hammond had a top-five hit in 1972 with the song, “It Never Rains in Southern California.” I’m thinking the dude was missing the first two months on his calendar.

AS IF ANYONE needs to be reminded, there are very few guarantees in pro golf when it comes to career success and longevity. Things can change pretty fast, then not change for months on end when a player wants them to. The following five guys are big-name types squarely at the crossroads, their careers in some form of flux, most of them in need of a big 2013 to retain their competitive hierarchy.

Jim Furyk: Let’s recap the last three years: FedEx Cup overall champion in 2010; then his worst season as a pro while struggling through equipment changes; then a winless 2012 with late blown leads at the U.S. Open and WGC-Bridgestone Invitational. Furyk turns 43 in May, so his window is shrinking by the hour, but after ranking 150th in putting in 2011, he climbed all the way to 18th last year. Were last summer’s meltdowns an aberration? Conflicting evidence at this point.

Rickie Fowler: If the mustache didn’t fly, neither did his attempt to make the Ryder Cup team. It was easy to expect big things after Fowler beat Rory McIlroy (and D.A. Points) in a playoff at Quail Hollow last May, but his season was derailed by a final-round 84 while (playing with Woods) at the Memorial a few weeks later. Li’l Rickie drives it a long way and is as good an iron player as anyone in the game, so why doesn’t he win more? Is he really a superstar on the verge – or another Charles Howell III?

Brandt Snedeker: Of the two semi-veterans who made their first U.S. Ryder Cup team last fall, I like Snedeker over Jason Dufner for a couple of reasons. One, he’s a better hard-course player, and that’s what most majors are contested on. Two, he led the Tour in putting last year while continuing to increase his length off the tee. Sneds has the perfect disposition for handling success; I would not be surprised at all if he continued his ascension – another multi-win season and his first major title.

Lee Westwood: His 40th birthday arrives two weeks after The Masters, and if the significance of that number lies in the fact that just six of the last 70 majors have been won by guys in their 40s, it’s also worth noting that it has happened in each of the last two years. It’s interesting that Westwood and Colin Montgomerie, two of Great Britain’s most decorated golfers, have been unable to claim one of the game’s grand prizes. Hey, Andy Murray ended one English drought. Is Westwood ready to escape Montyville? Hmmm….

Jason Day: Perhaps the game’s hottest young star after consecutive runner-up finishes at the 2011 Masters and U.S. Open, Day vanished from the competitive radar altogether in 2012. His highest regular-season finish was a T-8. He barely made the FedEx Cup playoffs, for crying out loud, ranked 183rd in driving accuracy and 167th in GIR. I’m not quite sure what happened here, but for Day’s sake, it best not happen again. 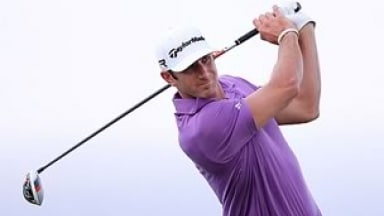 The top seven in the Official World Golf Ranking remained unchanged after the year's first week, but there were some major moves not much further down the list.