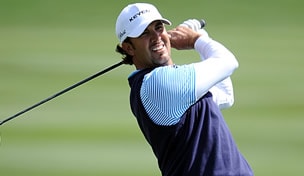 MARANA, Ariz. – When you’ve already won the $2 million Ultimate Game, while injured, while dead broke, and with no status on any major tour, competing in the WGC-Match Play Championship – with its $1.5 million first-place prize – seems relatively simple.

That big-money victory (half stroke play, half match play) came in Las Vegas in 2007, after Scott Piercy spent years toiling on the mini-tours. He had a $25,000 credit card balance, $5,000 in the bank, and a wrist that was ailing. After advancing through the stroke-play portion to net $100,000, he was three shots down with six holes to play in the winner-take-all final, then went 5 under for his final seven holes to win by three.

“I got in the zone and almost knew where the ball was going before I hit it,” he said. “That doesn’t happen very often. When it gets there, it’s fun.”

Piercy, 34, found one of those elusive zones again Friday against Luke Donald. He won four of the first five holes and steamrolled the Englishman, 7 and 6, to reach the Round of 16 at Dove Mountain. All four No. 1 seeds now have been eliminated by the end of the second round.

“It’s a little bit the nature of the beast,” Donald said afterward. “I think over 18 holes anyone has got a chance. I think maybe the No. 1 seeds, or the higher seeds, there’s a little bit more expectation on their shoulders and the other guys have nothing to lose.”

Said Piercy, “Tiger raised the bar a lot, and everyone is better. When somebody is on, they’re on. There’s not as big of a spread between who the best players are and sort of the next tier.”

A late bloomer, perhaps, but Piercy has learned how to win at every level. In 2008, he captured two titles on the Web.com Tour. Three years later, he won the Reno-Tahoe Open, an opposite-field event. Last year, he was victorious in Canada.

For years, Piercy was a long hitter who didn’t always know where the ball was headed. His recent work with instructors Jim Hardy and Chris O’Connell has changed that, allowing him to take advantage of his power game and focus on other areas of weakness, like his putting and chipping.

Now, he’s a complete player, and a proven winner, ascending to 37th in the world. He’s also supremely confident: Piercy knew he could hold his own against the world No. 1.

“My personality,” he said, “is I want to beat you anyway. I think I’m better than you. To be out here, you have to think you’re good.”

And on that first hole, Donald blocked his tee shot into the rocks, leading to a 1-down start.

“From that first tee shot,” Piercy said, “it didn’t look like Luke.”

Piercy won No. 2 with a birdie, the third hole with a par, and was 3 up before he hit his second shot on the 530-yard fifth hole. From 221 yards he hit a cut 4-iron that landed on the back portion of the green and rolled into the cup for an eagle-2.

“That was pretty, man,” he said. “You never imagine that you’re trying to make it.”

Piercy tacked on wins at Nos. 8 and 9 to build a 6-up lead at the turn, and when the match ended, after a birdie on the 12th, he had played his 12 holes in 7 under. But that isn’t even his hottest start on Tour. He shot 7-under 29 on his opening nine Sunday at last year’s event in Tampa, eventually finishing one shot out of the playoff.

“You know, losing sucks and it’s very disappointing,” said Donald, a winner here two years ago. “I would have liked to have given him a bit better of a match.”

But keeping up with a red-hot Scott Piercy, we’ve discovered, is no small task.