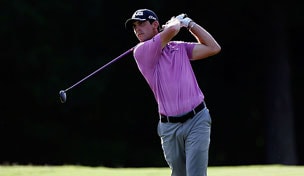 Scheduled to play with Woods in Saturday’s fog-delayed third round of the Farmers Insurance Open, Horschel and Wittenberg are now assured of playing the final 36 holes with Woods. With the PGA Tour deciding not to re-pair after the third round in order to speed up play, the young duo will continue on with Woods in the final pairing for the final round.

Horschel has never been paired with Woods, but he was excited by the news he’s guaranteed to play the final 36 with him.

“It’s a pretty cool thing that's going to happen,” Horschel said. “It's just going to be a fun day tomorrow and Monday, if we have to go into Monday.  So we'll see how it goes.”

Horschel, 26, and Wittenberg, 28, are seeking their first PGA Tour titles.

Woods, 37, is seeking his 75th PGA Tour title. Woods has won more PGA Tour titles than Horschel and Wittenberg have made cuts (48 combined).

Wittenberg has a great memory to build on, though. He was paired with Woods in the final round of the U.S. Open at The Olympic Club last year. Wittenberg shot 70 and moved past Woods on the leaderboard to tie for 10th. Woods shot 73 to tie for 21st.

“The guy that's winning the golf tournament has won a lot before, so in order to beat him, you're going to have to play some good golf and everybody knows that,” Wittenberg said. “So, we'll have to get out there and see what we can do.”