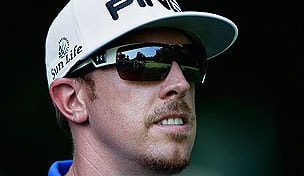 SCOTTSDALE, Ariz. – Hunter Mahan posted a third straight score of 4-under 67 at the Waste Management Phoenix Open on Saturday, thanks in large part to a near-miraculous birdie on the par-5 13th hole.

“I thought [the drive] was OK, but it rolled right into a cactus, so I took a putter and sort of backhanded it out of the cactus,” Mahan explained. “Then I hit a hybrid into a bunker and holed the bunker shot – and it was a hard bunker shot. I couldn’t have hit it any better. It hit the pin and went in. I worked hard for that.”

Afterward, he pondered where it ranked amongst the best birdies of his career.

“It’s pretty high up there, just for the up and down,” he said. “My percentage went from low to lower to lower, but that’s golf. It’s just an example of one shot changing everything.”