Hyundai Tournament of Champions Q and A 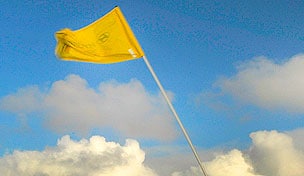 KAPALUA, Hawaii – They say the Masters doesn’t really begin until the back nine on Sunday. Here at the Hyundai Tournament of Champions, that may be literally true.

We’re officially two days into the PGA Tour season and the season hasn’t officially started yet. If that sounds like a riddle wrapped in an enigma, you clearly haven’t been paying attention to the festivities in Maui – or lack thereof.

After the initial opening round was wiped away just two hours into play on Friday, the scheduled restart never happened on Saturday, with strong, gusting winds canceling the day for good following three one-hour delays.

So … now what? Well, you’ve got questions, we’ve got answers. Here’s everything you always wanted to know about this tournament (but were afraid to ask).

Q: Why didn’t they at least try to play on Saturday?

A: The strongest winds were expected between 9 a.m. and 2 p.m. It wasn’t getting any better. Even if the conditions calmed down after that, they weren’t getting in 18. Besides, ever see Bubba Watson after hours of being told to sit still and be patient? It’s a shock he didn’t start hitting balls through the clubhouse windows.

Q: I play in wind all the time! These guys are such babies.

A: That’s not a question.

Q: Fine. I play in wind all the time! Why are these guys such babies?

A: That’s better. They’re not. That isn’t the issue here. Players aren’t whining about the conditions; they were simply unfit for play. Here’s the deal: If you can’t get the ball to stop rolling on the greens, you can’t play golf. Rules officials were testing the greens during the delays. They would drop a ball and watch it roll all the way off the greens – and that was uphill! It’s not as if the players revolted and refused to play. It was the rules officials who made the decision.

“It’s just ignorant. Come out here and see what we’re dealing with,” Zach Johnson said of those who disagree with the decision. “We can’t use an umbrella because of the wind. If it rains with the wind, that is not easy. And like I said, the ball won’t stop on the greens. So if the ball won’t stop on the greens, you can’t play golf. We’ve played in winds, but when you have gusts in the 40s on hills like this, it just makes it almost impossible.”

“We’re willing to play,” Hunter Mahan explained. “But you can’t when the ball is just moving on its own like it was yesterday. Wind is one thing. But on this golf course, that’s where the difficulty sets in. If it can’t stay on the green and it can hit and spin and roll right off into a bunker, I guarantee you people aren’t playing in that. Not in Hawaii on a mountain with greens that have a lot of slope. I play in Texas all the time, where it blows really hard, but it’s not designed the same. Wind doesn’t bother us. This is just a perfect storm of strong tradewinds at the wrong time of year.”

Q: Don’t they play the British Open every year in stronger winds than these?

A: Yes. And if St. Andrews was built into the side of a mountain, not only would balls roll off the greens, they’d never stop.

Q: So now what happens?

A: The opening round of the season is scheduled for a two-tee start on Sunday, with 36 holes beginning at 7:10 a.m. local time.

Q: Will they actually play or is it just going to be more waiting around?

A: The forecast sounds better than the first two days, with 20- 25-mph winds and gusts into the 30s, but nothing like the 45- 50-mph gusts that we’ve witnessed so far.

Q: Are they still going to play 72 holes?

Q: What if delays prevent the first two rounds from being played on Sunday?

A: According to PGA Tour vice president of rules and competition Slugger White, “Tuesday is not out of the realm as yet. But let's get through tomorrow first.”

Q: Why was this tournament slated for a Monday finish in the first place?

A: Well, the prevailing feeling was that it helped the final round get out of the shadow of NFL playoff games, which is well intentioned until you consider that the final game would be over before the telecast reached prime time on the East Coast. With a Monday finish, though, it’s backed right up against college football’s BCS Championship game. In this specific situation, it’s certainly hurt to lose an extra 24 hours.

Q: Is there a possibility of a 36-hole event?

A: There are a few PGA Tour executives who are fond of saying, “I don’t deal in hypotheticals.” It’s a valid question, though. Officials will do everything in their ability to play 54. If they can’t, a 36-hole winner would be deemed unofficial and – irony of ironies – wouldn’t qualify for this tournament next year.

Q: Going 36 in one day on this course is brutal. What about splitting up the rounds?

A: In his Saturday media session, White had the following exchange with a reporter:

“Because I didn't think about it.”

So … that should clear up that scenario.

Q: Isn’t this a perfect reason for moving this tournament?

A: Huh? This tournament has never seen weather like this. If it was an annual thing, sure. But one brief period of anomaly shouldn’t serve as a death knell for this event.

“All the years it’s been here, they’ve never ever even had to evacuate anyone off the golf course,” George McNeill said. “It’s just not something you can plan on, especially here in Hawaii.”

Q: So who’s more depressed about this – the players or the fans?

That’s a lot of stink going around.

Q: That answers pretty much everything. Just one more question: What’s going to become of those 17 fans who were still dutifully sitting under umbrellas on the first tee bleachers after the final announcement was made on Saturday?

A: One of two things. Either they’ll each earn co-PGA Tour Fan of the Year honors or they’ll catch the flu. Maybe both.