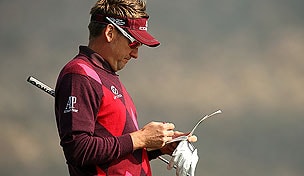 SAN ANTONIO – Rory McIlroy isn’t the only player who thinks he could use an extra week of competition.

Add Ian Poulter to that list, as the Englishman signed up for the Valero Texas Open a few weeks ago for a final tune-up before Augusta.

“With not having a green jacket in the trophy cabinet, why not mix it up and play the week before?” Poulter said Wednesday. “I’ve never done it before, so obviously it hasn’t worked so far. So let’s try something new.”

Last week, Poulter recently developed a chest infection that kept him from practicing as much as he would have liked. The benefits to teeing it up at TPC San Antonio, he said, are two-fold: It keeps him focused on tournament golf until Monday, and because he has played only four prior events, “it’s not going to do me any harm playing.”

Jim Furyk and Charl Schwartzel are among the other highly ranked players who are seeing TPC San Antonio for the first time this week.

“Phil (Mickelson) mentioned that it’s the wrong thing for him to do to come to a course like this to play golf,” Poulter said, when asked about the seemingly endless differences between this course and Augusta National. “I disagree. I’m not a player of golf. I don’t go home and play hundreds of holes. I’m a practicer, so it doesn’t bother me when I don’t play golf for six months on a golf course. That’s irrelevant to me. I see shots, and I visually practice.”