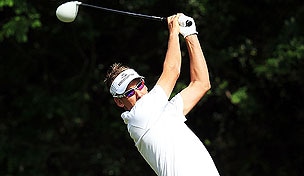 Getty Images
BANGKOK, THAILAND - JANUARY 09: Ryo Lshikawa of Japan in action during the foursomes on Day one of The Royal Trophy at the Amata Spring Country Club on January 9, 2009 in Bangkok, Thailand. (Photo by Ian Walton/Getty Images)  -

KAPALUA, Hawaii – As most tweets from Ian Poulter’s personal account are, the tweet he posted last Friday came unfiltered and without worry over repercussions.

He tweeted: “Still in full holiday mode. If I go to Kapalua next week it will be on Wednesday getting in Wednesday late afternoon. Not feeling it.”

Six days later, Poulter was on site here at the Plantation Course, competing in the pro-am before Friday’s opening-round start. But the question was still lingering: Just how close did he come to staying home?

He added that one of his main concerns entering the 2013 season is cutting back from the 26 worldwide tournaments that littered his schedule last year.

“It wraps itself around the majors and the WGCs – they are obviously lock-ins,” he said. “I think Wentworth back in the U.K. is probably locked in, The Players – they’re all obvious tournaments. There might be a few extras; there might be a few I’ve never played or haven’t played for a few years and there will be a few that I’ll knock off the schedule.”