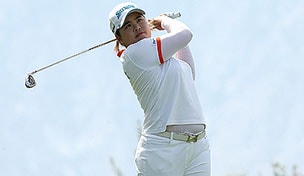 RANCHO MIRAGE, Calif. – Lizette Salas got her first look at Mission Hills as a teenager when her father brought her to see Mexican star Lorena Ochoa.

''I remember watching Lorena, and I came out with a little banner for her that said 'You can do it' in Spanish, and I had great memories from outside the ropes,'' Salas said. ''Now, I'm trying to make some from inside the ropes.''

She got a good start on that Friday, shooting a 4-under 68 to finish a stroke behind leader Inbee Park after the second round of the Kraft Nabisco Championship.

The 23-year-old daughter of Mexican immigrants, Salas was introduced to the game when her father, the head mechanic at Azusa Greens Golf Course west of Los Angeles, did some handyman jobs for the club pro and, instead of pay, asked him to teach his daughter to play.

She went on to star at the University of Southern California, where she was a four-time All-America selection and helped the Trojans win the 2008 NCAA title. She later caught Nancy Lopez's attention and they have become close friends, with the Hall of Famer serving as a mentor.

''I met her for the first time a year ago and she watched me in Phoenix, all 18 holes, and I went to dinner with her and she has been calling and texting me with more advice,'' Salas said. ''That's something that's amazing about her. She reaches out to a second-year player and just kind of has become my second mom on tour. I just can't thank her enough for all the advice she has given me.''

She showed her maturity on the par-5 18th after driving into the left rough and hitting her hybrid second across the fairway into the right rough. Instead of risking going into the water fronting the green, she pitched to the fairway to set up a three-quarter wedge approach that she hit to 3 feet for a par save.

''It was not a good lie and I knew if I would go for it, it would probably go in the water,'' said Salas, the lone American in the top 11 on the leaderboard. ''I'm comfortable in my short game and I'm not a long hitter, so I have to make it up some way. I've been working hard dialing in with my wedges because that's your go-to club. I just trusted it and went with my first instinct.''

Park shot a 5-under 67 to reach 7 under. The 24-year-old South Korean made three birdies in a row early on the back nine and rebounded from a wind-blown bogey with four straight pars on another hot afternoon at Mission Hills.

''Obviously, putted really good out there, especially on the back nine,'' Park said. ''The wind picked up, so it was tough out there on the back nine. Last four holes, I made all pars. I'm really happy with that.''

The former UNLV player is seeking her second major title after winning the 2008 U.S. Women's Open Championship. She won the LPGA Thailand in February for her fourth LPGA victory when 17-year-old Ariya Jutanugarn closed with a triple bogey to blow a two-stroke lead.

''I just like to stay a little quiet and just do my own thing,'' Park said. ''If I win a little more, I think I'll get a little bit more attention.''

Park hit a sand wedge from 70 yards to 2 feet for birdie on the par-5 11th to take the outright lead, then hit 9-iron approaches to 7 feet on the next two holes to set up birdies. The wind pushed her tee shot on the par-3 14th into the left bunker, leading to her lone bogey of the day, and she avoided further trouble on the final four holes.

''We were playing about a club and a half of a breeze there and it was getting tough,'' Park said. ''I'm just happy that I have a chance on the weekend that I can win.''

Sweden's Carolina Hedwall and Italy's Giulia Sergas were tied for third at 5 under. Hedwall shot 68, and Sergas had a 69.

Michelle Wie followed her opening 72 with a 70 to reach 2 under. She had six birdies, but three-putted the 18th for the last of her four bogeys.

''I made a lot of great birdies,'' Wie said. ''The whole round was pretty interesting in general. I hit some interesting shots around the trees.''

Playing partner Lydia Ko, the 15-year-old New Zealand amateur who won the Canadian Women's Open last August to become the youngest LPGA champion, was 2 over after a 74.

''She is amazing,'' Wie said. ''I think she's pretty good and, like I said yesterday, she is also a really good girl.''

Top-ranked Stacy Lewis was seven strokes back at even par after a 71.

''It's definitely frustrating,'' said Lewis, the 2011 champion who won consecutive events this year in Singapore and Phoenix. ''It's a major and you want to play well here, but that's golf. Some weeks, it's going to all come together and other weeks, it's going to be tough, and you've got to fight through it.''