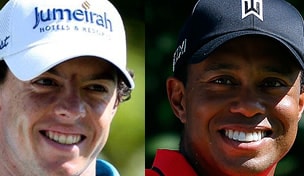 Getty Images
PARIS - JUNE 23: Professional Golf Player Colin Montgomerie of Scotland poses on the terrace of the Vivendi Head Office before a news conference to launch the Vivendi Trophy on June 23, 2009 in Paris, France. (Photo by Pascal Le Segretain/Getty Images)  -

Even in the new Nike commercial featuring McIlroy and Woods, we see these two titans being positioned as rivals, albeit playful rivals in an entertaining game of one-ups-manship.

“Dude, is that your real hair?” Woods asks McIlroy in the commercial.

“Is that all you got?” McIlroy asks Woods.

Here’s a look back at what industry analysts told Golfchannel.com when news first broke that McIlroy was going to be teaming  with Woods in the Nike athletes’ stable:

Scott Becher, executive vice president of Z Sports & Entertainment, a division of Zimmerman Advertising: “In many respects, this is a slow passing of the torch. Rory helps contemporize Nike in reaching a younger golf audience, but he can also, if used together with Tiger, help soften Tiger’s image for Nike . . . This is one plus one equals three for Nike.”

Rick Horrow, CEO of Horrow Sports Ventures and sports business analyst for Fox Sports and CNN: “I think it’s a win-win for everybody. For Rory, it’s an acknowledgment that he is the next great thing. For Tiger, he may get a likeability bump by being affiliated with a positive personality in a playful, human way.”

Andrew Zimbalist, an economics professor who specializes in sports at Smith College in Northampton, Mass. “If you were asking me about this Nike deal five years ago, I would be scratching my head and asking, `Why would Tiger Woods want to share the stage?’ But because of what happened in his personal life, with his golf game not being what it was, Tiger fell off the stage. This is an opportunity for Tiger, I don’t think there’s any question about it. I also think it is part of the image he is trying to create since he came out of the hospital after the accident.

“At this point, it’s fair to say Tiger is past his peak. That is not to say he’s going to decline rapidly, but his period of ascendance and domination is not what it used to be. To have somebody who is rising up, somebody who is not only a tremendous competitor, like Rory McIlroy, but somebody who is good-looking and has charisma and appeal, for Tiger to be able to hook his wagon up to McIlroy, that’s a positive for Tiger . . . If part of his image now, instead of standing by himself and promoting Nike products, if it’s doing it with somebody else by his side, that is portraying a Tiger who is now more relationally oriented.”

Bill Marshall, president of South Florida-based Team Marketing: “It’s a positive rub for Rory, Tiger and Nike. Tiger Woods is still the cornerstone of golf, regardless who Nike signs. He is still the Empire State Building in the city of golf. Whether you love Tiger or hate him, he still moves the needle in golf like no one else. He is still Nike, there’s no question about that, and the fact that Nike is enhancing its talent pool is complementary to Tiger. In appearing to be the future of golf, McIlroy is a good choice to complement Tiger.”