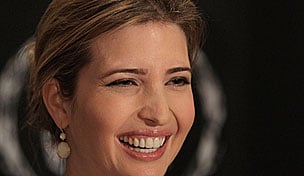 A homeless man with a history of stalking Ivanka Trump, daughter of real-estate mogul Donald Trump, was caught last week at Doral after forging press credentials to get into the WGC-Cadillac Championship, according to the New York Post.

Per the Post report, John Enabnit, 32, attended the tournament Saturday at Trump Doral with the goal of speaking with the 31-year-old heiress.

'He said he was in love with her and he was going to continue to do this so they can work it out,' explained Doral police chief Richard Blom. 'Once she talks to him, she will see it his way (and fall in love with him).'

Enabnit, who last month was arrested for stalking and harassment after attending the younger Trump's perfume launch in New York, was picked up Saturday after loitering around a VIP tent near the 18th hole at TPC Blue Monster. When closer inspection revealed that his name did not match the one on his press pass, he was kicked out.

According to the report, it wasn't until hours later that the cop who ejected Enabnit recognized his picture as belonging to an individual previously barred from the property. Authorities tracked him down to a nearby hotel on Monday, and Enabnit is now in custody in Miami with the prospect of facing felony criminal contempt charges in New York.

'We're just waiting for New York to pick him up,' a spokesman for the Miami state attorney's office explained according to the report. 'We want him out of here.'

Trump, whose father's company purchased the Doral Resort last year, was seen in attendance much of the week at the tournament, which was won by Tiger Woods.