Nicklaus: Woods had better 'get with it' to catch me 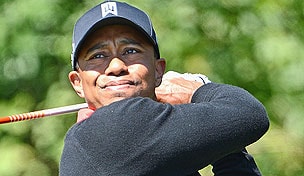 Woods' week at the Honda Classic included two lost balls, four shots in the water and 15 shots out of the bunkers. He made four double bogeys, was never better than 3 under par at any point and was under par for only 26 out of the 72 holes he played.

None of this was enough to alarm Nicklaus.

In what now sounds like a broken record, Nicklaus maintains that records are made to be broken, including his gold standard of 18 professional majors.

''I still think he'll break my record,'' Nicklaus said Sunday. ''Tiger's talent, at 37 ... it's not that old. I won four after that. They were spread out. It wasn't that difficult. I don't think for Tiger to get four or five more – or six or seven – is that big a stretch.''

Woods, of course, has been stuck on 14 since winning the U.S. Open in a playoff at Torrey Pines in 2008. Perhaps of more interest than his 0-for-14 streak since then is that he has not seriously contended in any of the majors since giving up a two-shot lead to Y.E. Yang at the 2009 PGA Championship. Sure, he was tied for the lead at the turn at the Masters two years ago. He was in the penultimate group at Pebble Beach in the 2010 U.S. Open, as he was at Royal Lytham & St. Annes last summer.

But when was the last time Woods had a realistic chance in the final hour of a major?

The Masters starts in 38 days, and Woods will be among the top two favorites to win a fifth green jacket, as he should be.

It's foolish to suggest 37 is old, even on a left knee that has gone through as many surgeries as Woods has won green jackets. Nonetheless, with age, time seems to go faster.

Even after the road to 18 majors went over a cliff at the end of 2009 – and it took Woods two years to recover from the public embarrassment of his infidelities, his injuries and yet another coaching change – Nicklaus stayed consistent in the belief that his own record will fall.

• ''If Tiger is going to pass my record, this is a big year for him in that regard,'' Nicklaus said at the start of the 2010 season, alluding to a major rotation that included Pebble Beach and St. Andrews.

•''I don't know whether he's going to continue to beat guys ... whether these guys have all learned how to play or they all learned how to win, they're probably no longer afraid of Tiger,'' Nicklaus said in March 2012. ''In my opinion, I still think Tiger will regain what he does. He will come back and play very, very well. Whether he breaks my record is another issue. I still think he will.''

Nicklaus never went through a major championship drought this severe, except for the 20 majors he played between the 1980 PGA Championship at Oak Hill and his 18th and final major at the 1986 Masters when he was 46.

It's too early to make a conclusion about Woods' 2013 season.

One week at the Honda Classic is not much of a barometer, nor is one day at Dove Mountain for the Match Play Championship.

Still, it's the inconsistency that keeps Woods from looking to be the threat he once was.

When Nicklaus was at about the same stage in his career, it was not unusual for him to miss the cut or have a bad week. But his results were never this up and down. At age 37, the Golden Bear had 14 straight finishes in the top 10 on the PGA Tour.

Look at the start to Woods' season. He missed the cut in Abu Dhabi, won the next week by four shots at Torrey Pines, and in his next stroke-play tournament, he never broke par and tied for 37th.

He won twice in five starts, at Bay Hill and Memorial. In the three tournaments in between, he tied for 40th at the Masters and The Players Championship and missed the cut at Quail Hollow. He gave up a 36-hole lead at the U.S. Open, and then won his next tournament. And then he missed the cut at The Greenbrier Classic.

About the only consistency comes from his answers.

''It's not that far off,'' Woods said when asked to compare his game at the Honda Classic with Torrey Pines. ''I feel like I'm probably just not quite driving it as well. My iron game is pretty good and my short game is way better than it was at Torrey. I feel very comfortable with my putting, so I need to obviously get it in play a little bit more and attack from there, because everything else is pretty good.''

Woods pointed to his mistakes at the Honda Classic as painting a distorted view of how he played. Four shots because of lost balls. Four shots from his water balls. All this is true, except every player can say the same thing.

You have to wonder if Woods has a different outlook at this stage in his career. No doubt he wants to win every time he plays, but perhaps his performance at regular events takes on less significance to him, as long as his game is sharp and he peaks for the majors.

And that can't be measured for another 38 days.