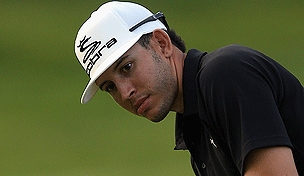 Since 2009, the Northern Trust Open has awarded an exemption to a player that 'represents the advancement of diversity in golf.' Thus far, no recipients of the exemption, begun to honor the 40th anniversary of Charlie Sifford's win in 1969, have made the 36-hole cut.

Behind a pair of eagles to go along with four birdies, 24-year-old Jeremiah Wooding fired a 5-under 66 in the second round, and at 1-under 141 easily advanced past the cut line. After opening with a 4-over 40 on the back nine Thursday, the UNLV graduate recorded seven birdies and two eagles across the subsequent 27 holes at Riviera.

'I just tried to stay patient and I knew nothing was going to be given to me,' Wooding told reporters after the round. 'I had to go out and earn it. It was fun. It was fun grinding it out.'

Wooding appeared on the bubble for much of the day, but birdies on both 17 and 18 gave him a 4-under 32 on the side - eight shots better than his first-round performance.

'I just kind of said, why not, why not just let it go. Have nothing to lose,' he said of his closing stretch. 'That's what I did, wasn't afraid to lose, wasn't afraid of anything, just go get it.'

Wooding will now also have some bragging rights within his family. His elder brother, Joshua, received the same exemption in 2010, but failed to make the cut after rounds of 71 and 76. He was walking alongside his younger brother during Friday's remarkable round.

'Caught me on 18 and gave me a big hug,' added Wooding, who will play alongside Peter Hanson and Cameron Tringale in Saturday's third round. 'It was a very cool experience.' 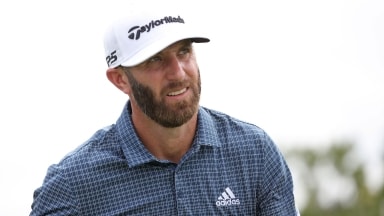